Talking with Astrid after the introduction of Cicero to the Dark Brotherhood Sanctuary with the Night Mother. She will tell you that a new contract has come up. An apothecary's assistant, Muiri, has performed the Black Sacrament and wants an ex-lover killed. Astrid tells you that you can find her in The Hag's Cure in Markarth. You apparently need to visit during business hours. 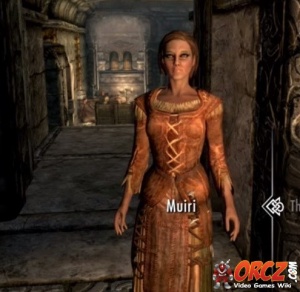 Head inside and talk with Muiri. She is a bit surprised that the Dark Brotherhood is still around in Skyrim. She will explain her situation and give you two targets: Alain Dufont and Nilsine Shatter-Shield (who is an optional target). Pressing her for more detials will get you 2 samples of Lotus Extract. With the right perks, this can be useful for a quick and stealthy kill of either of your targets. 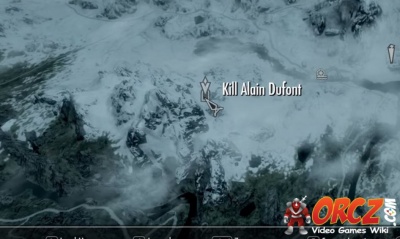 Head to Raldbthar. This is found in the mountains to the West of Windhelm. Make your way inside using the marked entrance nearby Windhelm. There are 3 bandit guard just outside the entrance. Be sure to deal with them then head inside. You can also just slip past them and get inside. Once inside, you will be facing most of the regular dangers of a dwemer ruin: Spheres, Spiders and a lot of traps. Plus some bandits as well.

Head down the slope and through the open gate in front of you. Keep going forward and you will find a charred skeever set in some flame jets. Turn to the left and head over to the next room. Turn to the South and start clearing out the bandits that are in this room. There are three in the room.

Head out of the room to the South. Turn to the West and continue down the slope in front of you. There are a few bandits around and Alain Dufont. Kill him and the other bandits. Go over to his corpse and claim Aegisbane.

You have a few approaches to deal with Nilsine. One of them is to reverse pickpocket and place Lotus Extract in her inventory. Otherwise, steal the Key to House Shatter-Shield. You can then sneak in at night and get her with a stealth kill.

She can also be found, during the evening, either in the Hall of the Dead (Weekdays) or the Temple of Talos (Weekend).

With one or both targets dead, you should return to Muiri in Markarth. Talk with her. She will give you Gold for killing Alain. If you also killed Nilsine Shatter-Shield, you will be rewarded with Muiri's Ring.

Whispers in the Dark