“Revealing the Unseen” is a College of Winterhold Faction Quest in The Elder Scrolls V: Skyrim

With things wrapped up with Savos Aren, the Dragonborn is directed to talk with Mirabelle Ervine about the Staff of Magnus. She know something about it and directs the Dragonborn to the members of the Synod after some roundabout conversations. She passes on that they were heading toward Mzulft and may be able to provide more in depth answers to what the Dragonborn seeks.

The Mzulft can be somewhat tricky to find. The search should begin in Eastmarch Hold. Start from Windhelm and head to the Southeast. In this area the Dragonborn is seeking the entrance to Dwemer Ruins. Look for pipework and steam to find this place. Just inside can be found Gavros Plinius. He has been ambushed and is dying.

Talk with him. Favros will direct the Dragonborn to Paratus who is headed for the Oculary within the depths of Mzulft. Wait for him to expire then loot the body to get the Mzulft Key and Research Log.

Head down the corridor behind the doors. Once more inside Mzulft be on guard for Worker Spiders. Be careful as the corridor turns to the North. The narrowed part of the passage has traps in it. Keep to the sides to avoid the worst of it.

On the far side of the narrow passage there is a body of one of the Synod Researchers. They yield some Enchanted gear which can be either useful or valuable. Head to the East and North through the corridor and follow this passage on through.

This will eventually lead to a change in scene:

Just keep following the passage as it leads forward. Expect to encounter a few Chaurus. Be careful moving around as there are more traps like tripwires:

Keep going to the Northeast through the corridors and cavernous sections. It will lead to another gate. Progress will be blocked until some Dwarven Spheres. Mostly because to move through the gate there is a need to pick it (Adept Level). Just head to the North and East after that and go through the door found there. This continues on the path toward the destination. There are more Dwarven Spider Worker and another Dwarven Sphere.

This leads to a room with a staircase leading down. Take care of the Dwarven Spiders here and head on down. There can be found an Alchemy Lab. Past it to the South is another locked gate (Adept level). Behind it can be found a number of valuables. Collect the good items then turn to the North and turn up the stairs. Open the door there and head along the Western side of the room.

Keep to the West and move carefully. There are pistons here that can shove the Dragonborn down into the Pit below where they must fight a number of Dwarven Foes. Get to the Northern side with a good sprint. There a single Dwarven Sphere awaits. Take it down then keep going to the North. This will take the Dragonborn to the Mzulft Boilery

Inside the Boilery the Dragonborn will begin to encounter Falmer. Deal with them and head to the North and East. Expect more Falmer and even more Chaurus. As the Dragonborn gets closer, expect a few Western turns to make into the next structure. Just keep moving forward. When you find a Master and Expert locked door, then it is not much farther to the next portion of Mzulft.

As the Dragonborn makes their way through the corridors, they will find this area:

Head through the Northwestern door. This will press things forward, up a lot leading toward the Aedrome.

Head on up the slope to the East inside the new area. Press onto the North. Expect a good number of Falmer to deal with when a big room is entered.

Once inside this room, head to the Northwest, up the stairs found there. Defeat the Falmer to get deeper in. One of them, likely a Gloomlurker will have the Focusing Crystal that is needed for the Oculary. Before going much farther, head to the East into a dead end chamber with lots of Falmer corpses and a powerful Automaton. This is a few rooms to the East from the Chamber that the Focusing Crystal was found in.

Inside this room is a chest with a key that is needed for an important chamber later on in the level (to access the way to the Observatory). Collect the Mzulft Observatory Key from one of the Falmer corpses or the chest. Now head all the way to the West and up the stairs to the marked door. Interacting it will prompt a response from Paratus Decimuius. Talk with him and tell him about the fate of Gavros and present him with the Focusing Crystal. Follow Paratus up into the Oculary.

Once the puzzle is complete talk with Paratus. He will be very excited as years of work are about to pay off. Look beneath the control buttons and there will be a map of Tamriel: 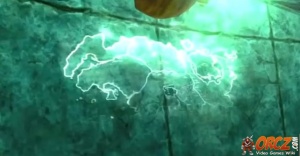 There is a problem as something is causing massive amount of interference. The point of interference is Winterhold. Immediately the College of Winterhold is suspected. Talk with Paratus to learn more about this. He will also, after some work, divulge the location of the Staff of Magnus: the Labyrinthian.

leave the area and the Dragonborn will be contacted by Nerien. He will explain the biggest trails are yet to come. He also tells the Dragonborn they will be called to make swift action and they should immediately return to the College at Winterhold. Things are beginning to get out of control there. Turn to the South as one departs the Observatory to find a shortcut back to the surface. From there just fast travel back to the College proper this will begin the next quest.