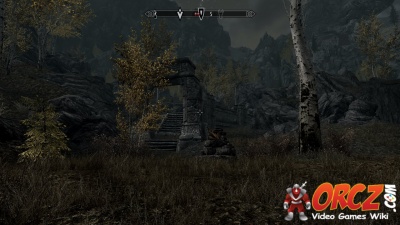 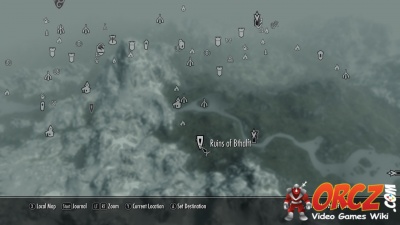 Ruins of Bthalft is a location in The Elder Scrolls V: Skyrim found in The Rift

This is a Bandit camp. Because of the close proximity of the Rift Imperial Camp, the occupants will often enter into conflict.

There are arches at the Northern and Southern ends of the camp. They both have Bone Chimes hanging from them. There are a number of crates, sacks and barrels in the area. A third arch to the southeast leads to a statue that has the machienry to gain access to the Aetherium Forge. By the Northern end of this area you will find a locked chest (Adept level), some more crates and barrels. There is also a Dwemer Convector unimportant unless you have Arniel's Endeavor as a side quest.

if Dawnguard is installed, a tower can be raised in this area after finding all 4 Aetherium Shards during the Lost to the Ages quest. This allows for much faster access to the Aetherium Forge.

There is a Corundum Ore Vein to be found in this area as well. it is found to the East of the circular area.