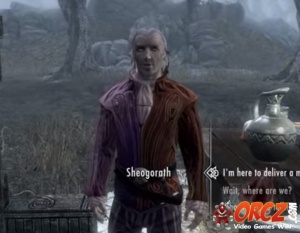 Sheogorath is a Daedric NPC in The Elder Scrolls V: Skyrim.

Sheogorath is the Daedric Prince of Madness. His motives are unclear and his gifts either come at a steep price or at the expense of some sanity. He can be very chaotic and unpredictable but he does seem to, usually, have some plan in mind that is hard to decipher until it is too late.