Skyrim: The Cure for Madness

The Cure for Madness in The Elder Scrolls V: Skyrim.

“The Cure for Madness” is a Dark Brotherhood Faction Quest in The Elder Scrolls V: Skyrim

When you arrive back from Breaching Security, you will be greeted by Gabriella. She will give you the rewards you have earned for the quest. She will then tell you about the incident that has happened into the Sanctuary. The details though, Gabriella leaves to Astrid. Head inside.

You will come upon Babette tending Veezara. He was apparently attacked by Cicero. You will learn that Maro is dead and that Arnbjorn chased after Cicero in a rage. They both vanished into the wilds after that. Astrid will tell you to head into Cicero's Room to learn anything you can about where they might have gone.

Go into the Jester's room. to the left of the bed is a Nightstand. Look on top of it. There you will find Cicero's Journal - Final Volume. Open it up, read it quickly, then head back to the main room. Go and talk with Astrid. It turns out that Cicero is headed for an abandoned Sanctuary in Dawnstar. The journal entry contains the passphrase: '"Innocence, my Brother."' Astrid will bid you to head to Dawnstar to deal with the mad Jester. She will bid you to take Shadowmere, the steed of the Dark Brotherhood. She will also ask you to find Arnbjorn as well.

Head outside the Dark Brotherhood Sanctuary. Turn to the left and go over to the pool of Darkness. Watch and you will see Shadowmere emerge from the pool. AFter that, you will want to travel to Dawnstar.

Head through the town and go to the North/Northwest. Stay along the coast as you leave the town. After a very short ride you will find the Dawnstar Sanctuary. Just outside is an injured Arnbjorn back in his human form.

Talk with him to learn that he also got Cicero badly with his own teeth and claws. From there, head over to the door and give the passphrase, "Innocence, my Brother". Head inside the Sanctuary.

Once inside, go straight ahead. You will start hearing from Cicero deep within the Sanctuary. Pause between the bottom of the ramp and the door forward. Look to the left to find a set of Jester Robes on the table there. From there just head forward to the North and open the door. You will encounter a number of Sanctuary Guardians as you wander this path. They will either be melee, ranged or magic users.

Go inside and turn to the left. Deal with the Guardian ahead of you then continue forward. Turn to the West when the Northern passage does. Stop at the foot of the bridge. First, there are extending spear traps. Secondly, there is another Guardian on the far side. Take out the Guardian and then carefully get across the bridge. Head down the spiral stairs after that. At the bottom, look on the table to find the Archery skill book: The Marksmanship Lesson and the One-Handed skill book: Fire and Darkness.

Move very carefully into the area below the bridge. There is a pair of Sanctuary Guardians along with a Tripwire trap set up to ignite the oil on the floor. You can trigger the trap to set the Guardians ablaze. Just pick them off with Arrows after that or charge in after the flames clear for an easier fight. Head across the area and down the hallway. Be careful because there is another Sanctuary Guardian wandering in this area.

Head out of the corridor and through the large broken window. You will see the trail of blood leads deeper in yet. Follow it to come to a split in the path. Instead of following the blood you will want to go down the passage to the right. This will let you get a clean shot at a unique troll: Udefrykte that would otherwise get a chance to ambush you. Take it out with a sneak attack or get the drop on it. If you are below level 22, sneak through this room. The troll is set to that level and very hard if you are not at or above its level. After that, drop down to the ground level. Once there find the blood trail again and follow it forward. Open the next wooden door and go across to the right-hand side of the gate. Pull the chain there to lower the bars blocking your way forward. Take the stairs down after that.

At the bottom of the stairs be on guard. There are more Sanctuary Guardians. Head through the passage carefully. There are a number more Guardians as you progress forward. Cicero will keep talking to you as he has throughout the dungeon. Go up the stairs at the end of the hallway. Once again, on the right, you will find a pull chain to lower the bars blocking your way forward. Get to the end of the corridor in front of you. Look to the right to find the next door. Open it up.

You will find Cicero on the ground. He is curled up and looking very badly hurt. You have a few choice with Cicero. It is a good idea to listen to what he has to say. You can kill him like Astrid commanded, but it is more advisable to keep him alive. He becomes available as a Follower at the end of the Quest line. If you do attack him, he will spring up, at full health and attack you vehemently. If he dies, it does not impact the quest line itself or future endeavors.

Either way, make your way out of the Sanctuary. Go across to the opposite room. Just inside it, to the left, you will find a lever. Pull it to give your a shortcut out. Just go up the stairs, turn left. Go through the door to the right and take the stairs up. It is a very quick trek out. After that, mount up or just fast travel back to the Dark Brotherhood Sanctuary. 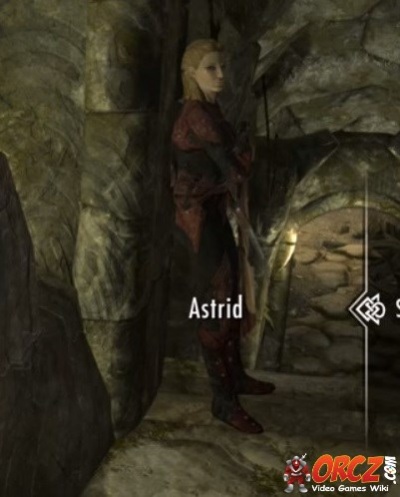 Once inside the Sanctuary, find Astrid. Talk with her to start wrapping up the quest. Lie to her if Cicero is alive or tell her you killed him. She will give you the details on the final assassination target before the Emperor himself: The Gourmet.