Skyrim: The Way of the Voice

The Way of the Voice

“The Way of the Voice” is the Fifth Main Story Quest in The Elder Scrolls V: Skyrim

You get “The Way of the Voice” after completing the quest “Dragon Rising”.

As you approached Dragonsreach you heard a thundering voice calling for the Dragonborn. Head inside Dragonsreach and talk with Jarl Balgruuf. He and his brother will explain that the Greybeards are summoning you to High Hrothgar found halfway up the mountain.

After that you are off to find and ascend up to High Hrothgar. Your first destination along this path is Ivarstead. It is found to the East of Whiterun. Head past Honningbrew Meadery, to the stone bridge over the White River. You will then start to find signs pointing you toward Ivarstead. Eventually you will come to the Valtheim Towers. You can the toll of 200 septims, persuade to reduce the cost to 50 septims. You still have a ways to go. You want to make your way up to Darkwater Overhang. There you will encounter a Troll you can fight or run from. It is just a short distance from there to Ivarstead.

Take some time in Ivarstead to find Klimmek and accept Climb The Stairs from him. When you are rested and ready, then it is time to start climbing the stairs.

Climb the 7,000 Steps is a small undertaking. There are a total of 10 shrines along the path. Each has an etched tablet which contains verses from the history of Man and Dragon. As you climb the steps, expect to encounter Wolves and worse. At the second shrine you may encounter a man: Barknar. He will warn about numerous wolves that are lingering on the path up to High Hrothgar. This is a good warning but they are not the only threat you will find here. Much farther up you can encounter Karita. She can be found at the fourth shrine. This is just before another fight. This time against a Frost Troll, which is lurking above you just before the fifth Shrine. 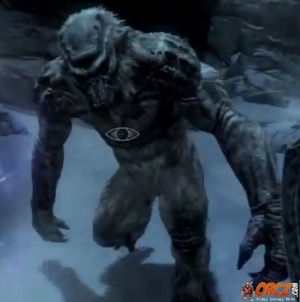 The Frost Troll, like all others, regenerates health but has a weakness to fire. Do not let this battle drag out as that will work against you because of its regeneration. Instead just focus on beating it up as much as you can. Use as much fire as you can to make this fight easier. If it too hard for you, just run away along the Steps. You will need to kill the troll but you can use the running to recover some. If you can't kill it alone, head into High Hrothgar and the Greybeards will help you will it. After the troll it is only a short ways to High Hrothgar.

Once inside you will meet a number of the Greybeards:

Approach and talk with Arngeir. He will ask you to use Unrelenting Force on him. Talk with him again after to start your training here. He explains the different parts of a Dragon Shout and the Words of Power that make them up. You are granted access to the second word and are asked to demonstrate it 3 times. The Greybeards will summon 3 Spectral Targets for you to strike with the Thu'um. Hold the Shout button until it is fully charged then loose it on the Specter.

After the 3 rounds here, the Dragonborn is asked to head to the Courtyard. Follow Borri outside to the Courtyard. Just go up the stairs in the back of the room and out the door. It is time to learn a new Dragon Shout. This will give you "Wuld" - Whirlwind for the Whirlwind Sprint. After that you need to select and use this new Shout. Follow the Greybeards then follow their example. Use the new Shout to launch yourself through the gate before it closes. With that complete you need to head back to Arngeir for the next part of this training. He wants you to retrieve the Horn of Jurgen Windcaller.

The Horn of Jurgen Windcalled