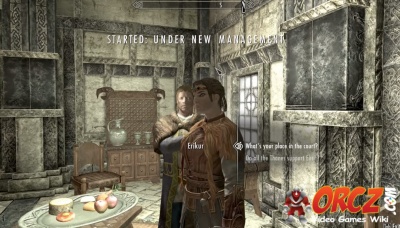 Under New Management in The Elder Scrolls V: Skyrim.

“Under New Management” is a Thieves' Guild Faction Quest in The Elder Scrolls V: Skyrim

A good trick here is to save before asking for a job. This allows you to try for a different city and focus your efforts toward one at a time. It will also ensure you do not start the one bugged quest.

Be aware that taking a job for Riften will not count toward the total of jobs you need to complete for this quest.

If you have the Dragonborn DLC, the Bedlam Job can send you to Raven Rock but it is bugged and cannot be completed. The Fishing Job for Raven Rock can be completed but do not count toward any reputation quest.

Brynjolf will give you the Tribute Chest Key and the Amulet of Articulation. This opens the chest nearby the Guildmaster's desk. The other Thieves will periodically put random gems and other items in there for you to take.