“Sovngarde” is the Seventeenth Main Story Quest in The Elder Scrolls V: Skyrim

You get “Sovngarde” after completing the quest “The World-Eater's Eyrie”. 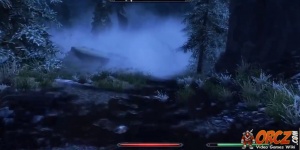 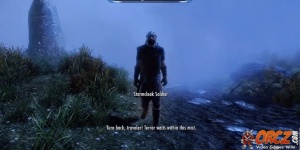 Talk with this Soldier to learn what killed him. He will also explain that Alduin hunts this mist-filled valley. It is here that the Dragon finds the Lost Souls to feast upon. Head along the path that sits on the ground. The Dragonborn is now seeking Shor's Hall. Continue through the mists and use Clear Skies as needed to clear the path in front of you. When you make it to the end of the path, you will find Tsun waiting there.

He will talk with the Dragonborn, asking by what right the Dragonborn claims entrance to Shor's Hall. Ultimately he will challenge the Dragonborn regardless of the answer. Just what the answer is varies on which of the Guild Quest you have completed: Companions, College of Winterhold, Dark Brotherhood or Thieves Guild. Do not attempt to slip by him as crossing the bridge before beating him will result in instant death. Tsun has the Unrelenting Force Shout mastered and will use it with fair frequency. He can hit very hard so expect to have some healing done here. You need to get him down to 60% of his total health. He will concede at that point and allow the Dragonborn to enter.

Once inside you will be prompted to talk with Ysgramor. he will explain that Shor commanded them to sheathe their weapons and wait for the next Soul to enter. he will then direct you to 3 Nord heroes you have encountered before. He states that they will help the Dragonborn in the battle against Alduin. 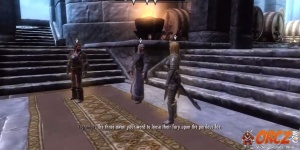 Talk with the 3 Heroes: Hakon One-Eye, Gormlaith Golden-Hilt and Felldir the Old. Felldir the Old will explain the plan to confront Alduin in Sovngarde