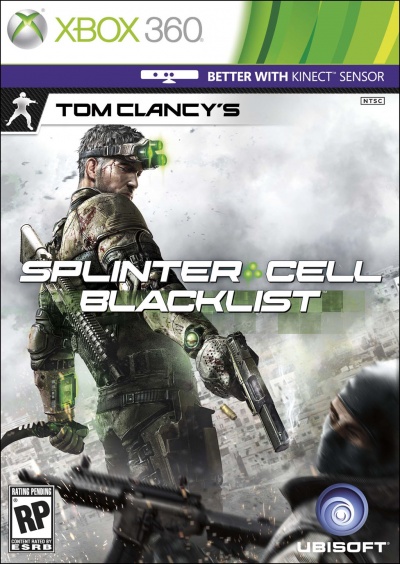 It positions itself as a sequel to Splinter Cell: Conviction but also plays as a sort of reboot for the series, with a new voice actor and younger look for protagonist Sam Fisher as well as a retold story of the Third Echelon spy agency.

Super-agent Sam Fisher finds himself in hot pursuit of a dangerous terrorist cell yet again.

After the incendiary events of Conviction, which had Sam invading Washington, D.C. to uncover corruption within Third Echelon, President Patricia Caldwell disbands Third and creates a new agency called Fourth Echelon. These elite operatives were hand-picked from various US intelligence, recon and ops agencies with the sole purpose of becoming the definitive team for taking down terror.

Their skills will be put to the test when twelve deadly terrorists initiate a mysterious protocol called only "The Blacklist," a series of increasingly devastating terrorist attacks against the United States.

Blacklist features many characters, both new and returning.

The title is confirmed to feature the following agents in various positions at Fourth Echelon:

Ubisoft announced on January 30, 2013 that they would be removing a torture scene from the final game. The scene, which had been shown publicly at press events in the past, caused controversy within and without of Ubisoft.

Blacklist producer Andrew Wilson said, "Definitely we are not going to see when the game's coming out that there are torture scenes in it. The scene is not there anymore. I've not heard anyone say they loved it."

The reveal trailer for the mode debuted online on May 2nd, and was quickly followed by another pair of trailers revealing multiple features for the mode.

Splinter Cell: Blacklist is targeting a large swath of platforms for release. It is currently confirmed for release on the following list of platforms:

The Xbox 360 version of the title will integrate Microsoft's Kinect motion tracking technology for peripheral features.

Players can use the Kinect's voice technology to call out to enemy guards, distracting them and allowing Sam to slip by.

Players are also purported to be able to control Sam himself by using the motion peripheral, although the specifics of this control method haven't been revealed yet.

The title was first revealed at Microsoft's press conference at E3 2012, where the electronics manufacturer touted the game's Kinect support as a reason to purchase it on the Xbox 360. The reveal caused some minor confusion in the following days as to whether or not the title would be exclusive to the Xbox 360, as its predecessor was. Playstation 3, Wii U and PC versions were soon revealed to be in development.