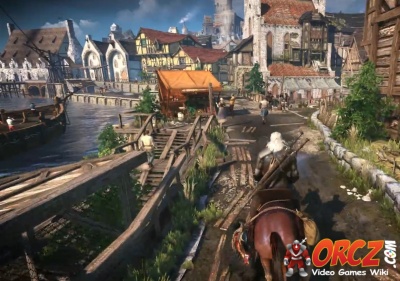 The Free City of Novigrad

Novigrad (also known as "The Free City of Novigrad") is a city in The Witcher 3: Wild Hunt.

This metropolis was once part of Redania, but now has the status of a free city. Novigrad is the largest city in the world, and without a doubt the richest as well. Home to the cult of the Eternal Fire, the town is officially ruled by the church's hierarch, though its underworld crime bosses also have a great deal of say in matters.

It is a major port city, and one of the biggest cities in the north, with a population size of 30,000

Novigrad is always bustling with activities, and you can run into all sorts of people here including thugs, beggars, sailors, traders, and more.

Peasants live outside the city gates and work in farms. You can also find farm animals there such as Geese and Sheep.

Inside the city dwell civilians of various wealth levels, from poor people to rich men.

Travelers from many different kingdoms can be seen in this city.

Lots of Sailors wander around the city as well, seeking entertainment while their ships are docked in the harbor. These sailors can sometimes cause disturbances, but there are many Guards patrolling the city to keep the order. Redanian Soldiers also patrol on horse in and around the city.

Dockworkers help unload cargo and do other tasks around the harbor.

All sorts of races reside in this city, including humans, Elves, Dwarves, and Halflings