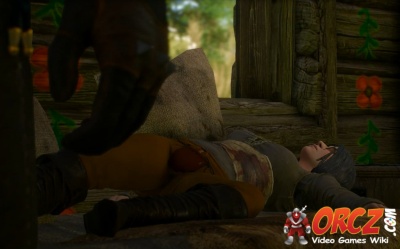 "On Death's Bed" is a secondary quest (sidequest) in The Witcher 3: Wild Hunt

It is one of the sidequests you get at White Orchard, during the Prologue.

Lena was injured by the Griffin on her way to meet her boyfriend. She is now in critical condition. Can the witcher help?

Speak to Tomira at her house west of the Village of White Orchard, and east of the Sawmill. When she tells you about Lena, mention that you "could try to help her."

After talking to Tomira and agreeing to help Lena, you need to craft a Swallow Potion. The ingredients are as follows:

The flowers can be found on the fields near the herbalist's house. Look for them east and southeast of the house.

The Dwarven Spirit can be bought from Elsa, the innkeeper at the Inn/Tavern in White Orchard (costs around 47 crowns)

Drowners can be found near the river. Check southeast of the Woesong Bridge.

Once you've gathered the ingredients, brew the potion and give it to Tomira to complete the quest.