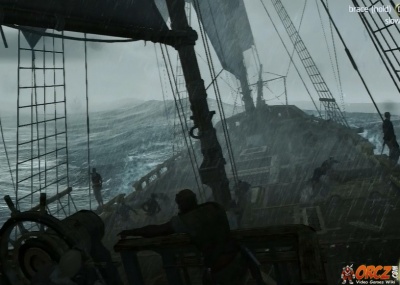 "Escape the fleet" is the last mission objective in Sequence 2 / Memory 06: The Treasure Fleet

Fire at the enemy ships as you speed away, and then drop firing barrels behind you to slow them down

Once you clear the enemy fleet, you still have to deal with Rogue Waves and Waterspouts.

For Rogue Waves, try to avoid them entirely, but if that is not possible then sail into them face on and brace for impact 2 seconds before hitting them. If a rogue wave hits you from the side, it could cause massive damage to your ship and even flip it over, causing desynchronization.

For Waterspouts, stay clear of them, though even when you are at a long distance from them they will still cause strong current that might cause your ship to swerve. Reduce speed to half sail to reduce the effect of the water spouts on the steering of the ship.