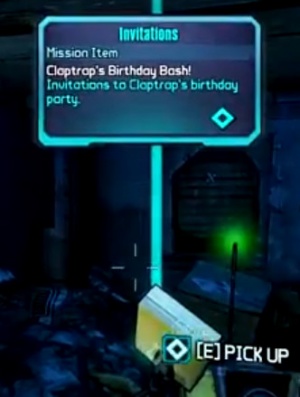 Claptrap has a birthday party and wants you to deliver these invitations. How many people will show up to his party?

Claptrap's Birthday Bash is a side mission in Borderlands 2

"It's my birthday! I first rolled off the assembly line seven years ago! Do me a favor and hand out these invites for my stellar birthday bash, will ya? And quickly, we're gonna start any minute"

Moxxi: "Ooooh, sorry I can't make it. Give Claptrap my live, though! My purely platonic love. Don't want him getting any ideas"

"Come on back, buddy! It's time to start the party!"

"I've set up some pizza and some sparkling wigglers - just hit that boom box and we'll get the party started!"

"Alright, the guests should be arriving an minute!"

"I'm sure everyone just got lost. This place is kinda hard to find"

"Feel free to mingle with um... nobody"

"(blowing) oh right. I don't have lungs. Minion, could you blow into this thing maybe, liven the party up a bit? yaaaay"

"Sigh. Well uh I think that wraps it up. Thanks for, um - thanks for comin to my party, minion. It looks like I bought waaaaay too much pizza. Take some home if you want."

"Heh - you enjoying the party?"

"That was the best party I've ever thrown!"

It's been several years since Claptrap was first built, and he wants to celebrate the occasion. He has asked you to invite some of his closest friends to his birthday bash in Sanctuary. Once you've done that, all you need to do is to have some fun at the party!"

You went to Claptrap's Birthday Party. It got pretty awkward.

Then turn on the boombox to start the party. The timer will count down.

eat some pizza, blow the party favor, and enjoy the party!

Dance with Claptrap, jump around him, move a lot, look up and down, be enthusiastic!

The 2:10 timer does not start counting down until you are done handing out the invitations

You can deliver the invitations in any order.

Sometimes the quest fails. But it could be because you did not enjoy the party enough. Run around, dance, and jump around Claptrap to enjoy the party.