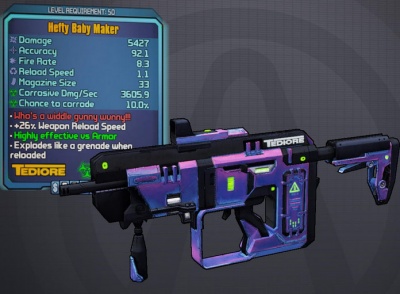 It drops from Madame Von Bartlesby in Tundra Express.

Status Effects and Other Bonuses

"Who's a widdle gunny wunny!!!" (red text effect) +26% Weapon Reload Speed Highly effective vs Armor Explodes like a grenade when reloaded Possible to have other elemental effects ( shock ) The Baby Maker has special "reload throw" properties. Tediore guns do damage to an enemy based on the amount of bullets left in the clip on the reload toss, so hitting an enemy with the thrown weapon on reload after shooting one bullet is the most effective use DPS-wise. Baby Maker specifically deals something close to double the reload throw damage of an equivalent Tediore SMG, in addition to spawning a second exploding gun after the impact of the first. This does consume the remaining ammo in the clip however, so this method, while extremely powerful, is also ammo inefficient.

Drop Rate of Baby MakerStatus Effects and Other Bonuses