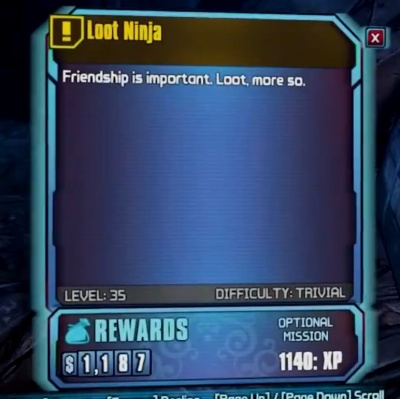 Head into the Hatred's Shadow. Just after you pass through Throgmuk's Precipice and get through the Orc Village, you will see the Quest marker. Just head into the Cave you find there to locate the start of this quest: Sir Gallow

Turn in: Torgue the Gatekeeper

A knight named Sir Gallow suspects one of his friends of a most heinous crime: loot ninja-ing. In other words, someone has stolen all of the gear that dropped from an enemy he and his buddies killed. He's asked you to track down his friends and kill them all in an attempt to discover which of them stole his loot.

Murder: completely fine. Stealing loot from somebody you murdered: unacceptable.

A loot ninja is a person who, in an MMO, will just rush in and steal the best loot for themselves before any Need/Greed or other determining rolls or choices are made.

Sir Gallow: "EVIL is on the loose! I recently felled a dragon, but could not find a SINGLE gun on its corpse. There is but one explanation: my colleagues are loot ninjas. You must eliminate them and return what they stole!"

Sir Boil: "I stole nothing! Sir Gallow has gone mad! MAD, I say!"

Sir Boil: "I shall not forgive this insult to my honor! Have at you!"

Sir Gallow: "Curious -- he carried no loot. He must not have been the loot ninja. Still, track the others down -- I will have my justice.

Sir Marsh: "This is utter lunacy! I am no ninja of loot!"

Sir Gallow: "Accursed luck -- he carried no loot either. Ah, well -- it must be the the final member of my former posse who betrayed me. Of this, I am CERTAIN!

Sir Gallow: "What's this, then? He had no loot EITHER? Curious. Nonetheless, you deserve a reward -- return to me. Return to me.

Get back into Sir Gallow's Cave:

Sir Gallow: "You're back -- let's get your reward, shall we? Shame about my former colleagues. If none of them were stealing the group's loot, I wonder who was. You may have ONE item from this chest! ONE!"

As the chest eats him:

Sir Gallow: "IT WAS THE CHEST ALL ALONG?! OH, CRUEL IRONY!"

Torgue: "man, that quest was dark and ironic -- a true look into the duplicitousness of interpersonal relationships! NOW COME SEE ME SO YOU CAN EXPLAIN WHAT THE HELL I JUST SAID!"