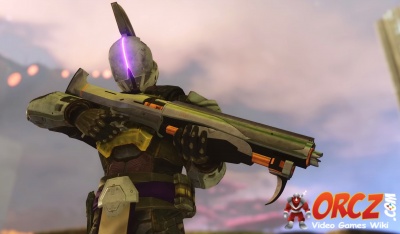 One of the most famous Titans known (see Helm of Saint-14). He was the first Titan Vanguard, the right-hand of the Speaker (who referred to as Father) and a friend of Osiris. He led a one person crusade against the Fallen, fighting them everywhere and throughout the system. He was a very key player during the Battle of the Six Fronts.

Saint-14 vanished on Mercury looking for Osiris to prevent Osiris from meddling with the Vex.

Saint-14 died in the Infinite Forest after a specific Vex Mind was made and tuned to their Light. This mind stripped Saint-14 of his Light. Saint fought the Vex for centuries within the Forest, destroying countless legions and incarnations of them.

The body of Saint-14 can be found within the Simulated Future, laid to rest above the melted husks and shells of all the defeated Vex.

The shotgun, The Perfect Paradox was given to Saint-14 by the Guardian. The Guardian has been the inspiration for Saint-14 and their crusade. This gun is one that Saint-14 eventually returns to the player after their death in the Infinite Forest.