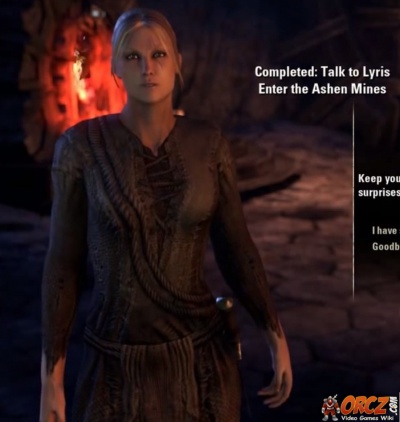 The Bleeding Forge (The Wailing Prison)

Talk to Lyris Titanborn. Keep choosing the first option of the dialog (see below for exact options). Don't choose "Goodbye" until the quest objective has advanced (after you select "I'll help you". At that point you can continue talking to her to get some more story info, or tell her "goodbye" and continue with the quest.

You've got more meat on your bones than most of these poor bastards. And I see you've armed yourself. Good!

I hope you've still got some fight left in you. You're going to need

A fellow prisoner. The name's Lyris.

Lyris Titanborn? I was told to find you

What? Who told you to find me?

A strange figure appeared in my cell. An old man in rags

The Prophet! He spoke to you? What did he say?

He said our fates are intertwined

He's a prisoner here. too. It was very dangerous for him to speak to you, even for a moment. He must think you can help me.

I can still hear his voice in my head. What does he want me to help you do?

Break him out, of course! Believe me, I can use all the help I can get.

That blind old man is the only person alive who can help us get back home. Tamriel's a long way from here.

Keep your weapon ready and stay sharp. This place is full of surprises.

I have so many questions

I'm sure you do. And I'll answer them as best I can.

Who is this prophet?

He's a strange one. no doubt about it. but he's the wisest man I've ever met.

He sees things. The past, the future. If he told you to find me. he must have had a very good reason.

What is this place? Where am I?

You're obviously not in Tamriel anymore. Think of the most miserable, depressing place you've ever been in your life. That's paradise compared to Coldharbour.

The how are we having this conversation?

I don't know. Once we rescue the Prophet, he can tell you about the Gods and the ways of Oblivion. I don't understand any of it, myself.

If I'm dead, who killed me?

A man named Mannimarco. His Worm Cult is doing some kind of ritual back in Tamriel. They sacrificed you. and everyone in this prison, to the Daedric Prince Molag Bal.

After you died, whatever was left showed up here. They call you the Soul Shriven.

What does that mean?

It means you're a slave and you'll spend the rest of eternity here in Coldharbour. working under the lash of the Daedra. Unless of course, you come with me.

Are you dead too?

No. I wasn't sacrificed. The Prophet and I were brought here ... conventionally, if that makes any sense. But we're prisoners here, same as you.

We need lo make our way through the Ashen Mines to get to the enclosure where the Prophet's being held.

How will we get him out?

It won't be easy. The place is watched by magical constructs called Sentinels. We won't stand a chance unless we can blind them.

I'll tell you more when we get there. And we'll never get there if we don't get moving.

QuestLocationWalkthroughDialogIntroductionWho are you?Lyris Titanborn? I was told to find youA strange figure appeared in my cell. An old man in ragsHe said our fates are intertwinedI can still hear his voice in my head. What does he want me to help you do?I'll help youI have so many questionsWho is this prophet?What is this place? Where am I?The how are we having this conversation?If I'm dead, who killed me?What does that mean?Are you dead too?What's our plan?How will we get him out?Previous ObjectiveNext Objective