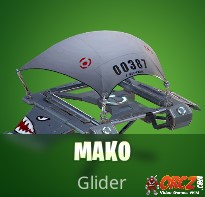 "Soar through the air like the mighty shark!" Allso came back in season 3