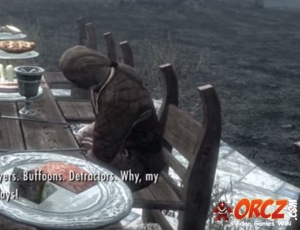 Pelagius the Mad is a Breton NPC in The Elder Scrolls V: Skyrim.

Pelagius the Mad, formerly Emperor Pelagius Septim III. He is the guest of Sheogorath. He was well known for his insanity.

In The Mind of Madness quest you will encounter numerous aspects of the Insane Emperor: