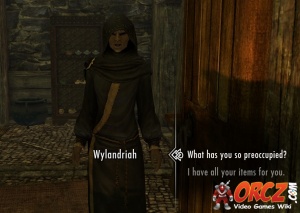 Wylandriah is an Altmer NPC in The Elder Scrolls V: Skyrim.

Wylandriah is the Court Mage in Riften. her main focus is the pursuit of her research. She tends to drift from one train of thought to the next without much recollection of the last one. She is a very gifted mage and is working on numerous projects at once.

She appears to be chronically forgetful, much to the annoyance of her employer.

She can be invested with to increase her on-hand Gold and open a shop.