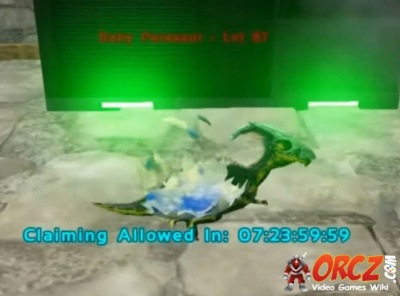 A Baby Parasaur hatching from a Fertilized Parasaur Egg. Have fun breeding dinosaurs!

This page has breeding dinos instructions and information for ARK: Survival Evolved

1) You need 2 tamed creatures of the same species, but of opposite gender.

2) Get the male and the female close to each other

3) Set both male and female to "Enable Wandering"

4) Beating hearts should appear over the dinos' heads.

7) The Fertilized Egg incubates when dropped, not when in your inventory.

8) Watch and make sure that the Fertilized Egg Health does not drop, if it drops than it means the temperature is not right for incubating. See "Incubation Temperatures" section below for temperatures needed for each egg. You can use torches, campfires, and air conditioners to regulate the temperature.

9) For Mammals, instead of incubating eggs, the female becomes pregnant.

11) When Egg has been successfully incubated, the baby dino hatches. For mammals, the baby is born once the Gestation Period ends.

12) Baby Dinos are fragile and have low health/carrying capacity/food capacity. Take good care of them in the first moments of their life or they will die if you leave them without food. for the first 10% of their maturity (while in baby stage), keep putting food in their inventory. After that, you can use a trough to keep feeding them.

14) Until fully-matured, the babies cannot attack and cannot be ridden. They will also flee from any fight regardless of temperament.

The following creatures can be mated: