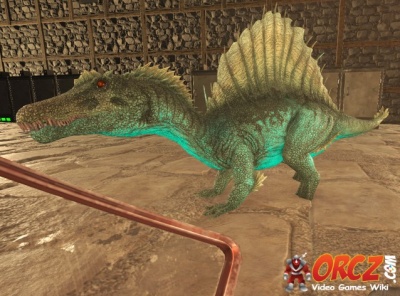 This page will have instructions for mutations in ARK: Survival Evolved

Note: Credit for original guide goes to /u/daymeeuhn from the Ark Subreddit. I just added it to wiki so that everyone can improve it with their own advice, experiences, and results.

Whenever you breed two dinos, you have a chance (currently observed as 2.5% based on info from the dev kit) to have a mutation occur. It does not make a difference if these two dinos are bred dinos or fresh tamed wild dinos, it's the same chance for all.

It's not one OR the other, but rather BOTH happen on a mutation, no matter what. Before you start saying "but I've seen one without the other before," finish reading the guide. A stat mutation happens before Stat Selection. What this means is a parent will mutate and increase a stat by +2, BEFORE the Stat Selection determines if a baby is getting either stat from the parents, and this allows for some shitty outcomes. Essentially, a parent can mutate a stat by +2, and then have that new mutated stat NOT pass on in Stat Selection. The end result, is a baby with stats identical to recorded stats you have on file, regardless of seeing a new point in it's Mutation Score. Crappy, right?

A parent can mutate a stat on the other parent. This is something I haven't seen discussed much before, but it's very relevant and we'll discuss why in a bit. But, essentially, if a Dad mutates (meaning his Mutation Score goes up by 1) a stat on the Mom can go up by +2 instead of one of the Dad's stats. A mutation is not inherently guaranteed to actually mean an increase on the dino that gained the Mutation Score. This plays a very important part in to Mutation Stacking. A Color Mutation will always accompany the Stat Mutation. This is important to understand, because if you see a new color, it means a stat went up somewhere in there even if you can't see it (which doesn't really matter for future breeding) but more importantly, if a stat went up there's a color mutation in there somewhere which DOES matter for future breeding.

The reason for this is because (and this is based on all evidence shown so far) colors, unlike stats, can hide as a dormant attribute on a baby. What we've seen in testing, is that colors seem to pull from a bloodline in weird ways, unlike stats; stats are ALWAYS pulled directly from two parents stat lines and never from further back on a bloodline. However, we HAVE found a baby to show colors NOT found on two of the parents previously, with no new Mutation Score points to be seen - implying the only conclusion, which is that a color was "hiding" in the tree somewhere and decided to show itself.

Again, testing colors is a lot more difficult than testing stats as there are no numbers involved with it, but this has been proven accurate on several trials. Also, contrary to the Wiki entry, color mutations always pull from a list of specific color options. The Wiki states that a color mutation can be "any color allowed on the dino in question for that region" which we can safely attest as being incorrect. There are a clear selection of colors associated with mutations, which also include some tricky ones like black, white, gray and brown, but never seem to pull from "boring" colors normally found on the dino.

Baby inherits the guaranteed Melee ATK, does NOT inherit Dad's HP (meaning he got Mom's shittier HP) and ends up with their combined Mutation Score: 5/20.

What happened here? Well, as said the Mutation Scores pass on regardless. The baby has no new mutations but still inherited a 5/20 Mutation Score from the combination of the parents. When that baby now breeds with a dino in the future, it will pass on that 5/20 again, so on and so forth.

This is why you'll see dinos with 1000000/20 Mutation Scores. This is nothing to brag about, it actually usually means your dino is just shit. The only way to usually reach scores like that is by breeding two high Mutation Score parents. The reason this sucks, is because two parents with maxed out Mutation Scores can't breed any new mutations. They need to have a Mutation score UNDER THE 20/20 to continue Mutations

As long as one parent is under 20/20 mutations, you can breed in mutations I-N-F-I-N-I-T-E-L-Y. This is Mutation Stacking. The idea of "a baby is limited to 20/20 from the Dad and 20/20 from the Mom" is STONE COLD INACCURATE. As we mentioned earler in the guide, A PARENT CAN MUTATE THE OTHER PARENT'S STATS. This means if a Mom is 0/20, and a Dad is 10000000/20 with 10 points mutated in Melee, the Mom can continue on breeding that bloodline by potentially mutating the Dad's Melee further. This works, we've done it. Several times.

make sure one parent ALWAYS has a mutation score under 20/20. If you can get both under 20/20, you're doubling your opportunities for mutations. (EDIT: Possibly not true, you might be able to breed further mutations even at 20+/20. I will continue attempting to see mutations myself in this range but I have never personally seen it.) There is no hard cap on mutating, the only limitation is time. If you mutated t-rexes over ten years hunting for mutations, you could have a t-rex on an official server with +500 points in Melee. It's possible. It just takes a really, really long time.