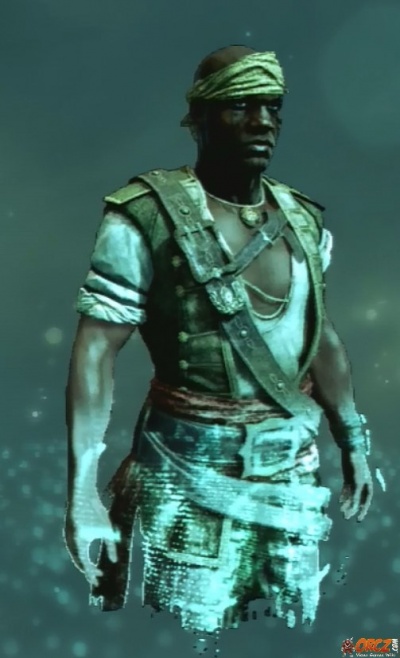 Adewale is a character in Assassin's Creed IV Black Flag.

He is Edward Kenway's quartermaster on the Jackdaw

Born to enslaved Ogoni parents in Yoruba. Adewale was sold to the owner of a prosperous plantation before his teens. He remained on this plantation, working the fields, until his mid teens, always scheming of ways to escape his predicament but uneasy with the prospect of living life as a fugitive.

Then fortune struck, giving Adewale the sign he needed At some point near his 16th birthday, a group of buccaneers raided the plantation, robbing it of raw cane, refined sugar and as many reales as they could find. Seeing in this an opportunity. Ade grabbed a crate of sugar and hauled it aboard one of the longboats the Buccaneers had rowed ashore. Surprised to see a slave among them, the Buccaneers were nevertheless thankful for the aid, and welcomed Ade among them

Ade sailed with this first group of men for many years, quickly learning the ways of a seaman, grateful for the chance to develop his own skills and chase his own passions. And though his life among buccaneers was not free of the usual bigotry of the era. Ade found the prejudice to be more confrontational than restrictive

In 1715, misfortune struck a cruel blow when the ship Ade was aboard, struck a shallow sandbar near the port of Havana. The buccaneers - mostly British at the^ time - tried desperately to free the trapped vessel, but after catching sight of an approaching Spanish Galleon, abandoned ship only to be tom apart by schools of circling bull sharks. Ade made peace with his fate, and stood his ground.

Taken to Havana for questioning and inspection, Spanish authorities eventually decided to send Adewale to Spain, where they felt he would make an excellent interpreter, owing to his fluent command of Spanish, English and French. Some weeks later, they loaded him into one of the Galleons that made up their perennial treasure convoy, en route to Seville.