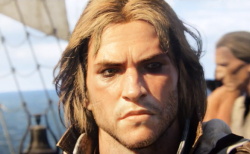 Kenway is an infamous pirate in the world of Black Flag, and stands alongside the likes of Blackbeard as one of the most feared and respected men of the sea.

He commands a loyal crew the likes of which can be heavily upgraded throughout the course of the game.

Many of Kenway's deadly skills come from his history with the Assassin's Guild.

He uses the standard issue Hidden Blade as a primary weapon, although he is also capable with rapiers, short blades, throwing knives, and more.

More of Kenway's backstory can be found in the Assassin's Creed 3 tie-in novel Forsaken.