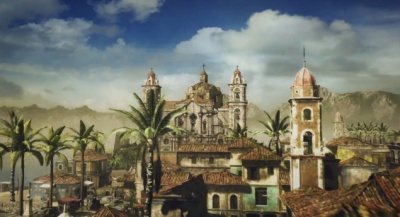 An overview of Havana, Cuba in AC4 Black Flag

One of the major port cities in Assassin's Creed IV Black Flag.

Players can come to Havana to collect resources and upgrades for the Jackdaw as well as for Edward himself.

Havana is the capital of Cuba

There were several attempts to found a town near the Havana Bay in the early 1500s A settlement was established by the Spanish Conquistador Diego Valazquez de Cuelar around 1514. The city sits on a bay that opens to the Gulf Stream and thus became a natural stopping point between Europe and the Americas. In the earliest stages of the golden age of - piracy Havana was burnt to the ground by French corsair, Jacques de Sores By the 1700s Havana was a large, heavily fortified port city where Spanish treasure ships would dock on their way to Europe. Pirates lurked on the approaches to the city, hoping to capture these same ships