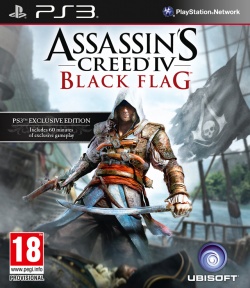 The fourth numbered title in the Assassin's Creed series, and the sixth overall.

Black Flag introduces a new protagonist named Edward Kenway and places the emphasis firmly on naval combat thanks to its pirate theme.

Players will sail the seas and traverse over 50 islands and land masses, plundering, looting, and of course assassinating every step of the way.

Until then, it is safe to assume that Black Flag will release in international territories on or around the North American date of November 1.

Assassin's Creed 4: Black Flag is a confirmed Playstation 4, Xbox One and PC release.

It currently does not have a date, but is expected to launch alongside the respective consoles.

Story details are vague as of this writing.

What is known is that Edward Kenway is an ancestor of Connor and Haytham from Assassin's Creed 3, and that he is affiliated with the Assassins over the Templars.

Kenway is an infamous pirate in the world of Assassin's Creed, and he uses his influence to loot treasures and advance the cause of the Assassins.

More details are expected to be released around E3 2013.

Black Flag introduces a number of new mechanics to the Assassin's Creed fold.

There are no more loading times in Assassin's Creed 4: Black Flag when traversing the world, making this the first true open world game in the series.

Players can sail their ship from one side of the world to the other with no hinderances, save the enemy pirates and Templars giving chase.

The hunting component from AC3 has been vastly improved upon.

Wildlife will now be more varied in both species and size.

Tropical environments will play host to numerous wild animals of all shapes and sizes, including deer-like Sika.

Hunting will also be possible onboard Edward's ship thanks to the introduction of whales, who can be hunted, killed and sold to foster the in-game economy.

Recruiting a crew is another new mechanic.

Pirates form manpower for your ship, lose too many in extended boarding actions and you will desynchronize, losing the fight and any plunder you've taken since the last save

When a pirate dies in combat, he will be dead for good, and must be replaced with another potential crew member.

Crew members can be recruited from both side missions and certain story missions.

Edward can dive under the sea to explore sunken shipwrecks, reefs and more.

While little is known about the underwater gameplay and controls at this point, diving should be a promising way of discovering new treasures and loot.

The Telescope allows Edward to scan for and tag treasures, enemies, wildlife and more from the safety of his ship, making a battle plan more feasible before jumping into the fray.

The next-gen version of the game is supposed to have more advanced visuals and to be a more "advanced simulation," according to Ubisoft.

It should be the ultimate version of the game.

The Playstation 3 version of the game includes 60 minutes of bonus missions, the names and contents of which have not yet been revealed.

It is currently unknown whether or not the Playstation 4 version of the game will also include that content, although it is generally assumed that it will.