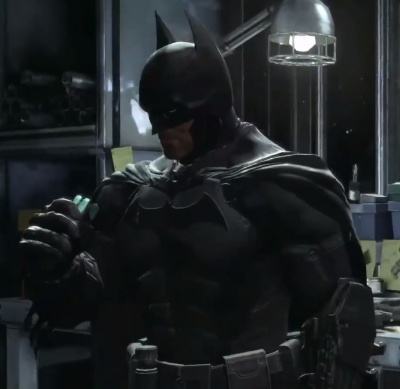 Batman examining a Concussion Detonator at his Workbench in the Batcave in Batman:AO

Batman is the main character in Batman: Arkham Origins

Batman is the secret identity of Bruce Wayne

His parents were killed during a mugging when Bruce was a boy, and so Batman has resoled to rid Gotham City of the criminal element

Batman trained extensively both mentally and physically to achieve perfection in both fields. He dresses as a bat to prey on the criminals' deepest fear

In addition to Batman's physical strength, he also possessed high intelligence and wit, and uses clever, non-lethal Gadgets to help him fight crime

Batman's base of operations is the Batcave below Wayne Manor

Batman is aided by his loyal butler, Alfred