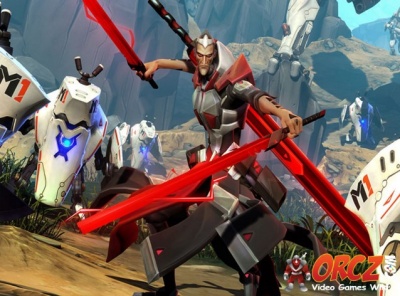 Verod Rath is a former member of the Keepers of the Blade (Empress Lenore's Royal Guard) He is a master swordsman and very efficient and deadly with his three energy blades.

Rath is a hero in Battleborn

Is part of The Jennerit Imperium Faction.

Brutal, efficient, and deeply devoted to the art of combat, Verod Rath once served as elite guard to the Jennerit Empress, Lenore. He utilizes three energy blades to devastate his foes in close-quarters engagements. Not a vampire, though he gets that a lot.

Rath Pro Tips/builds from the creator of Rath (taken from a post by Gearbox Software dev u/gbx_fletch on reddit):