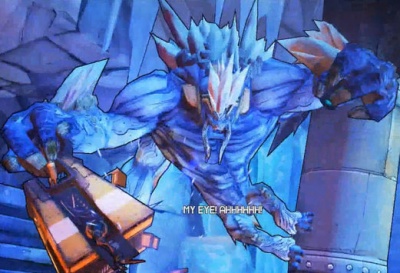 After Knuckle Dragger rips out Claptrap's Eye, it is up for you to retrieve it, in the Borderlands 2 mission "Blindsided".

Blindsided is the second story mission in Borderlands 2. You get it after completing the mission My First Gun.

Knuckle Dragger, a dangerous Bullymong just ripped Claptrap's Eye out. It is up to you to get it back.

Gear Up. After Handsome Jack left your for dead in Windshear Waste, you escaped the cold and met a CL4P-TP General purpose robot - the last of his kind on Pandora. He has enlisted you as his minion: You are to help him kill Jack and save Pandora. Before you can do any of that, however, you will need to deal with a slightly more pressing matter: Claptrap's eye has been ripped out by a Bullymong and you must help him retrieve it

Knuckle Dragger is dead and you got Claptrap's Eye back! Now you just need to find someone to reinstall it for him.

Cleaning up the Berg