Borderlands 2: My Kingdom For A Wand 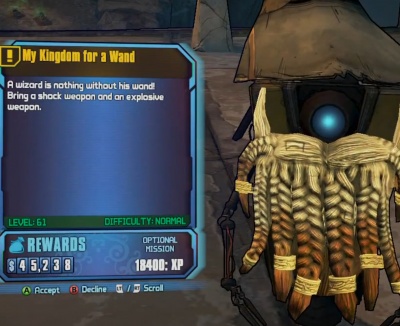 My Kingdom for a Wand

Talk to Claptrap the Wizard in Stonecrag Ridge inside The Mines of Avarice.He will give you this side quest after you complete The Beard Makes The Man.

Give Wand to Claptrap

A wizard is nothing without his wand! Bring a shock weapon and an explosive weapon.

Claptrap: "I've got my magic beard, but my wand's running a little low on magic juice. Here -- take it."

Claptrap: "I need you to jam that thing into a few magical creatures and then kill 'em. The magic juices in their blood should charge the wand! First up, the wand will need golem magic, for stability. Find a magical golem."

Claptrap: "Insert the wand into the golem and it should start charging. You notice how I didn't giggle, there? I feel like I'm growing."

Insert the wand: Claptrap: "Alright, the wand's wedged in there! Now blow him apart!"

After grabbing the wand:

Claptrap: "Now, the wand needs some arachnid magic, for flexibility. Find a spider and stab 'em with my wand!"

When jammed into the Spider:

Claptrap: "Crap, it's growing a shield! If you don't kill the spider with a shock weapon, the wand won't charge now!"

After killing the Spider:

Claptrap: "Awesome! The Wand only needs one more charge! Grab it!"

With the Super Charge Wand:

Claptrap: "Now the wand only needs a charge of Orc magic, for power. You know what to do!"

Jamming the Wand into the Magical Orc:

Claptrap: "Oh, crap, he's feeding off the wand's energy! You've gotta kill him with a critical hit! Knock his stupid orc face off!

After killing the Magical Orc:

Claptrap: "Alright! The wand is fully charged! Just bring it back to me! And don't worry -- that last mixup with the orc has taught me my lesson!"

Giving the Magic Wand to Claptrap:

Claptrap: "I can feel the magic coursing through my veins, and it's making me mad! Mad I tell you, MAAAD!"

Claptrap: "The lesson I learned is, 'magic is awesome and I should keep doing it'."