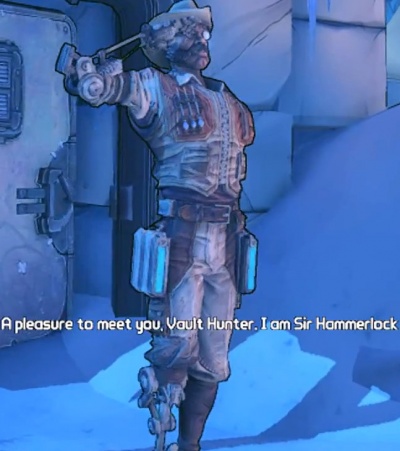 Sir Hammerlock, an NPC in Borderlands 2

Sir Hammerlock is an NPC in Borderlands 2

A true gentleman and a scholar, Sir Hammerlock has come to Pandora to study the local wildlife. Pandoran wildlife doesn’t take particularly well to being studied, which explains why half of Hammerlock’s limbs are now made of metal. Still, his various injuries have done nothing to quench Hammerlock’s thirst for knowledge, and he’ll likely pay a go-getting Vault Hunter to help him continue his research.

Location in Campaign of Carnage[edit]

In Mister Torgue's Campaign of Carnage DLC, Sir Hammerlock is located inside the Badass Crater Bar

You first meet Sir Hammerlock during the mission Cleaning up the Berg, he tells you he came to research the Bullymongs for his almanac, but Captain Flynt's men trapped him in the glacier. He tells you he is headed to Sanctuary himself and could use a hero like you.

Hammerlock helps repair Claptrap with the Claptrap's Eye you brought him.