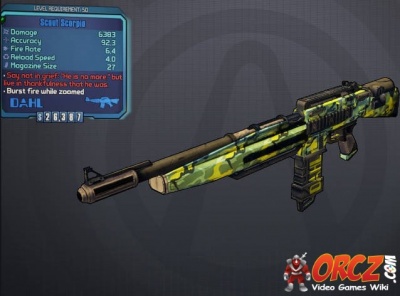 Credits for this information go to T3hPhish from Reddit who gave me permission to use it in the wiki so that the information can help other people Skorcher 06:48, 11 October 2012 (EDT)

When you complete a quest that gives you a blue reward item, that item is usually unique. You can only get this item once from the quest and sometimes it is actually really badass. Let’s use an example. If you start the quest “Won’t Get Fooled Again” in PT2 around lv 40, you will get a lv40 unique pistol called the “Law.” However, that is not the best “Law” you could be getting, because it is lv40. If you do not accept the quest, it will stay unaccepted in your quest log until you do accept it. You may talk to the person who gives the quest, but you should NOT accept the mission, because that will fix its level to whatever it says.

On completion of PT2 you will have access to PT2.5, a mode where every single enemy, quest and item is scaled to roughly lv50. Don’t get me wrong here, this is not a new game that you start from the beginning, this is just PT2 except everything is scaled to you. This means that the rewards from these now-lv50 quests are also lv50, meaning you will get the best version of that once-per-playthrough item.

So you might be thinking to yourself, “Gee, if everything is scaled to me in PT2.5 maybe I should just ignore every single sidequest and just do story missions to get PT2.5 as quick as possible!” Well, you can do that, but I highly advise you not to. PT2 is significantly harder than the first run, every little bit of experience helps. I’m not saying it’s impossible to do, it will just be a helluva lot more challenging for you.

The purpose of this guide is to list all of the unique rewards from quests -- not all these guns are “good” for PT2.5, but it is mainly up to you to decide if the item is good or not. (Personal preferences and all that.) Some of the mission rewards listed here may sound really bad to you, but hey, maybe you’ll like the item. You never know if you will like a gun with red text unless you try it. As a note, I have skipped over every quest that gives out a unique skin, because it doesn’t matter what level a skin is. Also I skipped a few quests here and there that give unique items that are completely useless (Like “Moxxi’s Endowment” from the quest “The Good, the Bad, and the Mordecai.”)

Face Time is the second part of a three part optional mission given by Mal in the Eridium Blight.

All the assassins have specific unique weapons they can drop while all 4 have an increased chance to drop Emperor.

Assassin Oney may drop the Judge, a Jakobs Pistol with both types of Crit Bonuses.

All of these unique weapons that each assassin drops are Blue Rarity, Red Flavor Text weapons and are Unique to these specific enemies. Emperor has an increased chance to drop from each of the assassins but can also be found anywhere legendaries can drop.

All assassins also have an increased chance to drop a class/character specific Skin. They are as follows: Maya's Dark Focus, Gaige's None Blacker, Axton's Black Ops, Krieg's Black As Day, Salvador's Black is Black and Zero's Dark Night. All of these skins are more or less based upon the color black and are some of the few in the game that get this color scheme.

Wrong. Quest Reward from Lilith after completing The Endkindling.

Night Sloth is a slag sniper rifle that fires in a 3 round burst. It does some pretty good damage but the tradeoff is that the rounds it fires are little orbs that travel slower then normal rounds

The Overlooked: This is Only a Test[edit]

Edit: Lady Fist was patched at some point and had its critical damage modifier increased to 800%. I believe it was during the Loot Hunt. Anyways, Lady Fist is great as long as you crit. You can even use a lower level Lady Fist (like a lvl. 72 LF at OP8 for instance) with a Bee to do some serious damage as long as you are hitting crit spots.

You Are Cordially Invited: Tea Party[edit]