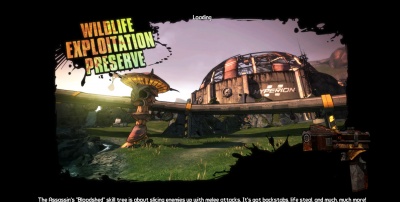 What happens when you combine a great deal of money with a great deal of immorality in Borderlands 2? The Wildlife Exploitation Preserve is your answer. Hyperion used its massive funds to create what basically amounts to a 24-hour animal torture camp, where Hyperion “scientists” experiment on Pandora’s wildlife, researching both the uses of Eridium and how loud a Skag screams when it’s tortured (hint: pretty loud).

Hyperion has started bringing the creatures of Pandora here to do tests on them to figure out how they work and how they can exploit them.

During the game, Handsome Jack tells you that he had his boys built the preserve to research the full applications of Slag. It's not just an elemental damage type - If you know how to use it, slag has lots of applications