Breath of the Wild: A Gift For My Beloved

A Gift For My Beloved is one of the side Quests in LoZ:BotW

A Gift For My Beloved is a Quest (Side Quest) in the game The Legend of Zelda: Breath of the Wild.

Talk with Manny in Hateno Village.

Manny wants to get the attention of Prima

Manny: Even in the rain, still gotta check everyone out... Ever stayed at the Ton Pu Inn?

Manny: Makes no difference to me, but... I'm supposed to check out everyone who comes into town.

Manny: I know things have been peaceful recently, but the outside world is still pretty dangerous, yeah? So I gotta check and make sure if any beauties-er, I mean - suspicious folks have come around here.

Manny: *sigh* If you're lucky enough to stay at the Ton Pu Inn, you'll see what I mean. Say hullo to Prima for me if you do. Not that she even knows who I am... This is tough... I have to give her SOMETHING. What kind of gift do you think Prima at the Ton Pu Inn would want? Just take a guess. That's not for me, you understand. It's for ... my buddy's friend.

Prima: Sir... did you need something from me?

Prima: Why is he asking? Whatever, I'll just say something random... I'll tell you something I really like... Crickets. It's my dream to have my very own collection of 100 Restless Crickets. As if...

Manny: Yeah? What is it?

Link: I talked to Prima.

Manny: What? Prima told you what she wants?! Prima... never even talks to me...*ahem* I mean, that's cool, that's cool. SO THEN, WHAT IS IT?! Prima wants [[Breath of the Wild: Restless Cricket|Restless Cricket? And 100 of thme?! Hahaha! What a small world! I love Restless Crickets! I'm a connoisseur of them! I think that's what that word means... But catching 100 of them is going to be tough. Think you could help me get started on those? How about you get me... 10 of them? I'll get you something nice for your trouble.

Manny: Yeah? What is it?

Link: I got the goods!

Manny: You have some Restless Crickets?! Wow, that was fast! I haven't even caught one yet... Well, lemme see those restless crickets you caught! You really got them? I thought you were just messing with me. Yep, that's 10. Thanks, I'll take 'em. A little somethin' for your troubles... 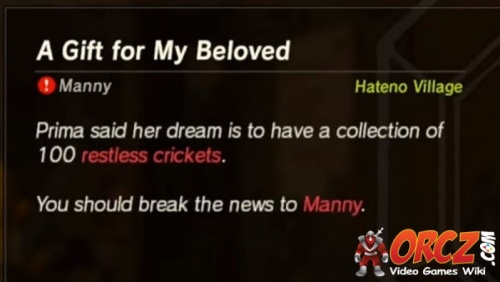 Prima said her dream is to have a collection of 100 Restless Crickets.

You should break the news to Manny

[ A Gift For My Beloved Video Walkthrough]