Breath of the Wild: A Song of Storms 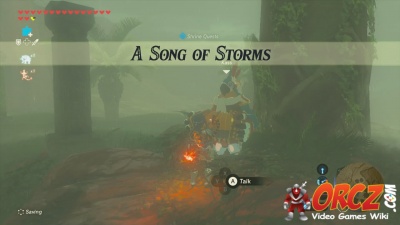 A Song of Storms is one of the sidequests in LoZ:BotW

A Song of Storms is a Quest (Sidequest) in the game The Legend of Zelda: Breath of the Wild.

Talk with Kass found nearby Calora Lake on the Eastern side of it.

A Shrine Quest requiring Link to attract a Lightning Bolt.

Kass: Very impressive. Not many could make it up here in such rain. I'd expect no less from a well-worn traveler like yoruself. Me? I stay nice and dry. My feathers repel the rain rather well. And my instrument was designed to withstand extreme moisture. When your livelihood revolves around ancient songs, you've got to be prepared for a few raindrops. I know a song about this place. Would you like to hear the ancient verse passed down in this region?

Kass: Excellent! Without further ado... "When a lost hero calls down lightning from the sky/ The monk responds from a giant mound on high."

"When a lost hero calls down lightning from the sky/ The monk responds from a giant mound on high."

Solve the riddle of the song you learned from Kass and seek out the hero's trial. 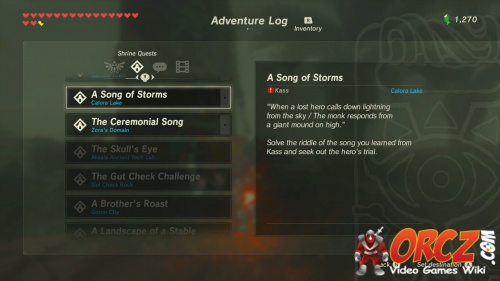 By attracting a lightning strike, you shattered the large rock and revealed an ancient shrine concealed within.

A Song of Storms Video Walkthrough