Breath of the Wild: An Ice Guy 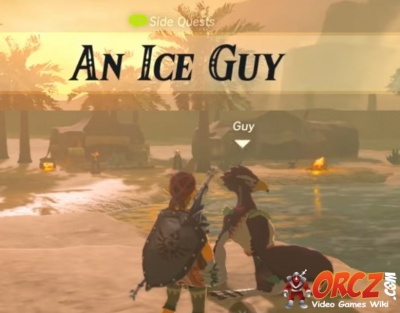 An Ice Guy is one of the sidequests in LoZ:BotW

An Ice Guy is a Quest (Sidequest) in the game The Legend of Zelda: Breath of the Wild.

Talk with Guy in the Kara Kara Bazaar

The Rito Guy has been stuck at Kara Kara Bazaar because of the heat.

Guy: Hello there... But before I say any more... Have we... met before? I came from Rito Village.

Guy: Yes, Rito Village, Far to the north of here... It's a modest village on the Tabantha Frontier.

Link: I've been there!

Guy: I had a great plan, you know. I left Rito Village to try to earn some money out in the world... But it's so incredibly hot here during the day. It's tough to work up the will to go any farther. I would like to see what Gerudo Town looks like, even if I can't go inside... It's just so hot. I heard there's an elixir that can help beat the heat. It's made from insects with cooling effects and monster parts. But they don't seem to be selling the elixir anywhere. I've heard insects with these cooling effects live in the cold parts of the Gerudo Highlands, but... Well, the monsters there are rough, to say the least, so I've not having a lot of success getting myself motivated...

Guy: Thank you! Now I can get across the desert while it's still light out! Here, let me give you something in return. By the way, in Gerudo, "thank you" is "sarqso." SARQSO!

Guy of the Kara Kara Bazaar needs a cooling elixir to beat the heat.

The medicine is made by combining a bug with cooling effects with monster parts. You'll find the bug in quest in the cooler regions of Hyrule. 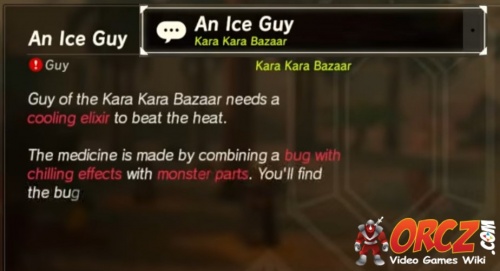