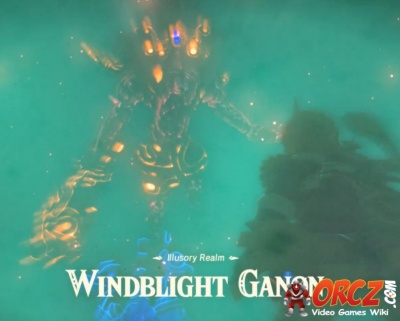 Windblight Ganon is one of the Main Quest in LoZ:BotW

Windblight Ganon is a Quest (Main quest) in the game The Legend of Zelda: Champion's Ballad.

The Medoh's Emblem have awakened a trial within Divine Beast Vah Medoh. Travel to the Divine Beast to attempt it.

This is the final challenge of Revali's Song.

: To the one who approaches this Divine Beast... In the name of the Goddess Hylia, I offer this trial. In exchange for Medoh's Emblems... you will be granted the chance to tread through the realm of memories. Those who lack determination will find this trial unforgiving. Do not take this place lightly, nor dismiss it as merely a world within your mind. The truth is much deeper than you know.

This illusory realm was created from the depths of your memories... The enemy you shall face is a product of the fear that dwells within. You must overcome this fear to proceed. This battle is a trial of the soul. You must emerge victorious using only the tools provided.

Kass: Perhaps meeting you here was no coincidence. This is a perfect spot for you to get lost in your thoughts, as well as a perfect spot for me to write a song. Ah! Wandering around here and listening to anecdotes about Champion Revali has truly invigorated me. In fact, it has inspired me to honor him in my own way, separate from my teacher's unfinished song. That is why I felt inclined to roost here, near the Divine Beast Vah Medoh which [[Breath of the Wild: Revali Revali]] himself mastered. I've written a song... to try and capture the essence of Champion Revali...

Recall Medoh's Champion of flight, before he fell to his fateful plight. Revali's feat was a wonder to see, so the princess made her plea.

Hmm... It seems that the Rito Champion was not one to share his feelings. So? What do you think of Champion Revali's Song? By writing a song that highlights the hidden feelings of Champion Revali, I feel closer than ever to my dear teacher. I feel more confident that I can do those missing lyrics justice.

Revali: I truly never imagined you would do so well. Regardless, Revali's Gale should be more efficient than ever. As you are, I guess it's theoretically possible for you to best Ganon.

You completed the three trials inscirbed on the stone monument in the Hebra region.

After you collected three of Medoh's Emblems, the monk told you to head to the DIvine Beast. What waits you there?

Go to the Divine Beast Vah Medoh and find out. 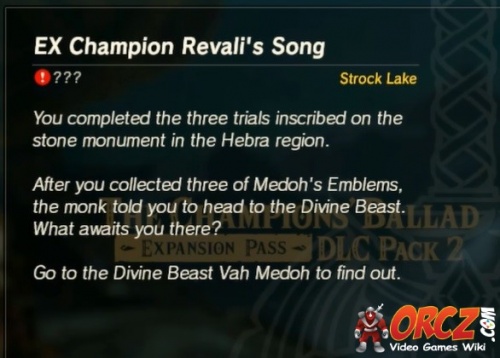