Breath of the Wild: Calamity Ganon 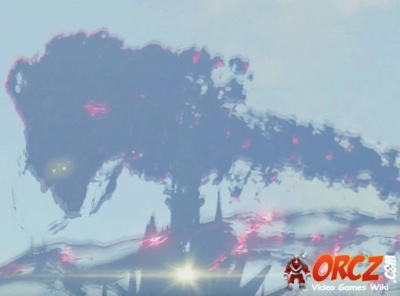 Calamity Ganon is a character from the game The Legend of Zelda: Breath of the Wild.

Calamity Ganon is the main villain (antagonist) in the game, and Link has to defeat him.

Calamity Ganon is first mentioned by the mysterious voice at the Great Plateau Tower, after completing the main quest Follow the Sheikah Slate.

One hundred years ago, Calamity Ganon brought the kingdom of Hyrule to ruin. It appeared suddenly and destroyed everything in its path. So many innocent lives were lost in its wake. For a century, the very symbol of our kingdom, Hyrule Castle, has managed to contain that evil. But just barely. There it festers, building its strength for the moment it will unleash its blight upon the land once again. It would appear that moment is fast approaching...

The source of the darkness that has appeared time and again throughout Hyrule's history. It's been called many names, from "Great King of Evil" to "Calamity." Hiberanting within a cocoon, it attempted to regenerate a physical form after Link awoke but was forced to confront him in an incomplete state.

After Ganon was defeated by Link, the remaining Malice pulled itself together to form this bestial creature. Its appearance and fiendish magic earned it the name of Dark Beast. This form is considered to be Ganon's original, although in this state, his awareness has been consumed entirely by Malice, and all he knows is a desire to rampage and destroy.