Breath of the Wild: Destroy Ganon 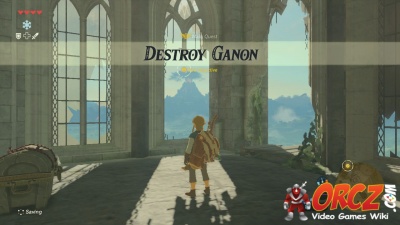 Destroy Ganon is a Quest (Mainquest) in the game The Legend of Zelda: Breath of the Wild.

Make your way through Hyrule Castle to confront and defeat Calamity Ganon.

Zelda: ... Ganon... Ganon... Ganon was born out of a dark past. He is a pure embodiment of the ancient evil that is reborn time and time again... He has given up on reincarnation and assumed his pure, enraged form. If set free upon our world, the destruction will be unlike anything ever seen before.

Zelda: I entrust you with the Bow of Light - a powerful weapon in the face of evil. Link... you may have not yet be at a point where you have fully recovered your power or all of your memories... But courage need not be remembered... For it is never forgotten.

Zelda: That energy covering Ganon's body is called Malice. None of your attacks will get through as he is now... I will hold back the Malice back as much as I can, but my power is waning. Attack any glowing points that you see! May you be victorious!

Zelda: Aim for a glowing area!

Zelda: Link! Look up there!

Zelda: That's the very core of Ganon's being! Do what you must Link.

Zelda: I've been keeping watch over you all this time... I've witnessed your struggles to return to us as well as your trials in battle. I always thought - no, I always believed - that you would find a way to defeat Ganon. I never lost faith in you over these many years... Thank you, Link... the hero of Hyrule. May I ask... Do you really remember me?

The ghost of King Rhoam told you that Hyrule is on the brink of annihilation.

Princess Zelda is currently fighting to contain Calamity Ganon inside Hyrule Castle, but her power cannot keep him at bay forever. Eventually, Ganon will regain his full strength and destroy the world.

Your ultimate task is to aid Princess Zelda in defeating Ganon before that can happen. 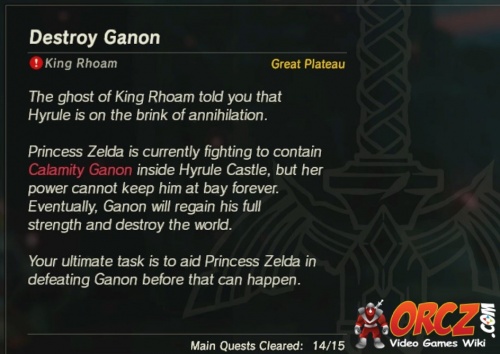