Breath of the Wild: Dragons 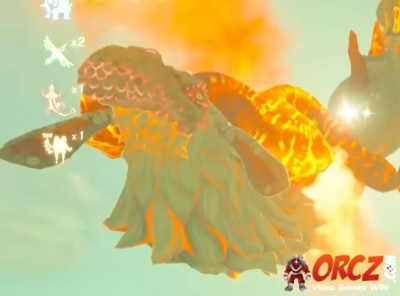 Dragons are ancient primordial spirits in Breath of the Wild.

Note: Credit for this Dragons Guides goes to /u/Fluffguck from reddit.

Armors such as the tunic of the wild, barbarian's armor, and champion's tunic require different dragon parts to upgrade.

Farming the dragons, once you know how, is easy. Doing so is required to get the champion's armor to max level. The champion's armor has the highest defense in the game. While the champion's armor precludes you from having set bonuses, the advantage of the extra defense is much more significant than it seems. With maxed champions armor and soldiers/ancient/wild helmet and boots, Link has 88 defense. Without it, Link is at 84. At 84 defense Silver Lynels hit Link for about 5 hearts. At 88, they hit Link for a quarter of one heart with most attacks.

The player can get the champion's tunic early and can go start getting the horns from these guys basically right away, giving you access to a 32 armor chest piece extremely early in the game.

There are three Dragons:

The most basic things you will need are arrows and a durable bow. Single-shot bows are best here as they are more predictable, and 3/5 shot bows have the tendency to hit the wrong spot on occasion. The best bow you could possibly use is the Twilight Bow as it goes perfectly straight and has nearly infinite range. After that, the Ancient bow shoots perfectly straight but doesn't have infinite range, and the Phrenic bow shoots almost perfectly straight. These bows make things a little bit easier but are not really worth farming beforehand if you don't already have one, any bow will do. Golden Bows from the Gerudo area function similarly to the Phrenic bow, and are another good option if you're having trouble.

Second, throughout Hyrule are three different springs - Power, Wisdom, and Courage - and talking to these seems to be necessary to make the dragon spawn timing consistent. Spawn timing consistency still seems to be somewhat fickle from game to game, and what works 100% of the time on mine has occasionally worked 0% of the time on others. It's possible there are hidden breakpoints in the game that change dragon behavior, but I don't know what if so. It may also be that dragon spawn timing is simply not consistent between all games.

Note that the spring of wisdom will have a different style from the other two, involving a quest to free Naydra from the Malice that has corrupted him.

Third, you need at least cold resistance gear. It is of course possible to do it via potions/food, but you'll be farming so many parts that you'll waste more time getting that than just going to rito village and buying the warm armor. Upgrading warm armor to level 2 is highly recommended so Naydra cannot freeze you. The rubber suit and flamebreaker gear are also handy for not taking a ton of damage, but not required. Lastly, you need to activate a couple of shrines (but don't have to complete them unless you want to) These are Shai Utoh at Ubota Point in the South East, Shae Loya at Tabantha Great Bridge in the west, and Jitan Sa'Mi, which is located at the same place as the spring of Wisdom and which you will unlock for completely Naydra's quest.

TLDR: Get bow, get arrows, get warm armor, get shrines near where I'm going to send you, start the quests for the dragons, and complete Naydra's.

Things to know about the dragons that will make your life easier.

The main purpose of the dragon items is to upgrade armors. The Barbarian armor requires one of each horn, the Champion's Tunic requires two of each horn, and the Tunic of the Wild is two of each part from each dragon. Unlocking the shrines behind each spring also requires one scale of their respective dragon. Altogether, this is five horns, two fangs, two claws, and three scales, from EACH dragon. Some amiibo-only armors exist that require more dragon parts, but I will not be including those in the total.

The bulk of armor upgrading cost is in the Tunic of the Wild. If you don't intend to go for 120 shrines, you only need three of each horn, and one of each scale for the shrines if you want them.

After armor upgrading, the parts still serve a purpose in that they are enormously powerful ingredients in food. They are the best duration ingredients in the game. Each part has different power, which is scale<claw<fang<horn. Combining a horn with food that has some kind of effect makes the effect last for thirty minutes. They also sell for a lot of rupees, and can be traded to Kilton for a lot of mon. Combining more than one part at a time does nothing.

The dragon parts drop based on where you shoot the dragon. Horn=Horns on their head, Fang = in the mouth, Claw = any of their feet, Scale = anywhere else.

After shooting the dragon, the item will glow for a minute then get shot off in a random direction. They have a tendency to land in water, which is OK because they float. After landing they will glow, but try to at least see which way the item flies off because they can still be relatively hard to find if you don't.

The dragons will shoot elemental balls randomly from their heads. The balls correspond to the dragon's "type" so Farosh = Lightning, Naydra = Ice, Dinraal = Fire. Getting hit by these will inflict their respective elemental status effect of shock, freeze, and burn. Fire only does damage, the other two will knock you out of the sky. Ice can be resisted and ignored with warm armor. Only the damage can be prevented from the lightning balls with rubber armor, they still knock you around.

The dragons generate huge amounts of updrafts all around them. Lifting yourself with the paraglider on these updrafts will refill your stamina every time, making it possible to float forever as long as you can stay near a dragon by simply closing then re-opening the paraglider.

It's possible to shoot the dragons while on foot, but I recommend shooting them from the air. Drawing your bow in mid-air makes time slow to a crawl while you aim, and also makes your arrows travel faster relative to everything around you. This makes hitting the part you want much more consistent. Aiming in this way drains stamina, but it can be refilled instantly from near a dragon by simply opening your paraglider.

Dragons do not spawn if you are standing on their spawn point.

After spawning, Dinraal and Naydra like to go way up in the air and spin around their spawn point for a while before routing.

The dragons have long routing systems and the ones I list here are not the only places/times to find them at all, but they do seem to be the most reliable and fast ones I have found.

The places listed in this guide have stables nearby, a great source of arrows. You can only get one item per dragon per in-game day.

TLDR: One dragon per day, part depends on where you hit them, hit them in the air for it to be easier, they generate updrafts to help with that, try not to lose the thing you shot off.

Where to go and when[edit]

Dinraal spawns up at the Eldin Mountain Range. He then goes down the north side of it around the eldin great skeleton, then travels west and then southwest over Mount Drena. He then routes through tanagar canyon all the way southwest until disappearing out to sea.

To catch him in a good spot, teleport to shae loya shrine, run north to the Tabantha Bridge Stable. The cooking pot there will stay lit even during rain, so wait there until morning. Link will stand up at 5am. From here you can run over to the great bridge and wait there, the dragon will pass under the bridge at around 6:30. Alternatively, run north with the canyon to your left until you see the dragon. I tend to cross paths with him this way at around 5:45 in-game, after which I simply jump down from the cliff, float over to him, and shoot him.

If that route does not work for you, I also have had success waiting until morning, getting to the forgotten temple, and waiting on the west side of that for him to come down over the mountain. need to verify after patch

Naydra spawns on Mount Lanayru, circles the mountaintop for a while, and then travels west heading to Lanayru road. She disappears into the water near the end of it.

Wait until morning, anywhere. If you've just done Dinraal the timing should be ideal to come here second. Teleport to Jitan Sa'Mi Shrine. Exit shrine, climb to the top of the mountain. From the mountaintop, jump off and glide to the west. See this image. The blue route is for the dragon, the yellow route is what you are trying to do. You should arrive quite a bit before Naydra (she won't spawn while you're on the mountain) and she approximately follows the blue route. After landing at the yellow circle you should be able to look up at Mount Lanayru and see Naydra. For me this caused her to spawn 100% of the time before about 7:30 AM. Just north of the yellow circle is where you want to intercept her. Note that she travels quite a bit faster than it appears so you want to jump ahead of her to catch her.

Farosh is the biggest pain for a lot of reasons. He has multiple places he can spawn that are far away from each other, making him inconsistent. When he does spawn he likes to dive in and out of water making it hard to time when to hit him. When you do get close, he throws out lightning that will drop you right out of the sky, rubber armor be damned. Wear Thunder Helm does help if you have completed its quest.

Farosh is easiest to find at 5:00am (morning) at Riola Spring. The lake is closest to Shoda Sah Shrine which is closest to Faron Tower. It will spawn from the center of the lake. If you try mining it will not show up the next morning, but after normal gameplay he spawns there the next morning. The Shard of Farosh's Horn is easy to get from this location as when the dragon spawns it creates an updraft and its horn is pointing straight up. If a fire is created under one of the big trees around the lake you can sleep there even if it is raining.

Additionally, he likes to sometimes spawn in Lake Hylia and circle around that diving in and out of the water. You should be able to see him from the Lake Tower if that is the case, but I find this one to be much more obnoxious to hit him at and prefer Floria Bridge.

Like most things in breath of the wild, conquering the spirits of Power, Wisdom, and Courage requires more in prep work and figuring out what to do than actually doing it.