EX Ancient Horse Rumors is one of the sidequests in LoZ:BotW

EX Ancient Horse Rumors is a Quest (Sidequest) in the game The Legend of Zelda: Champion's Ballad.

RUmors point to ancient horse gear that has surfaced in Hyrule.

Rumor has it there's a bridle that enhances a horse's skill and a saddle that can summon your horse right to you. Does this suppose ancient horse gear really exist?

Apparently Highland Stable has a copy of Super Rumor Mill EX, which details some rumors about this rare horse gear. 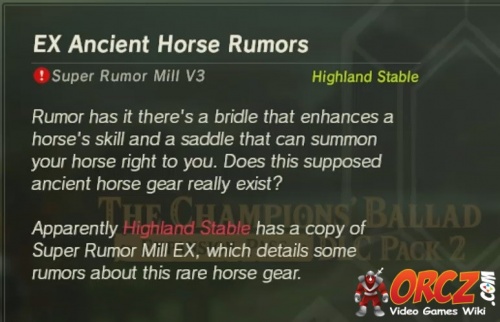