EX Treasure Usurper King is one of the sidequests in LoZ:BotW

EX Treasure Usurper King is a Quest (Sidequest) in the game The Legend of Zelda: Champion's Ballad.

The famous bandit had stolen even more from the Royal Family stores than thought. It is said the helmet of the self-proclaimed king of Twilight was among the items stolen.

"The helm of the self-proclaimed King of Shadows is in the swamp of the valley of dead trees, south of Dueling Peaks."

Misko's EX Journal 2 notes where the Usurper King's Helmet is hidden... but where could it be talking about? 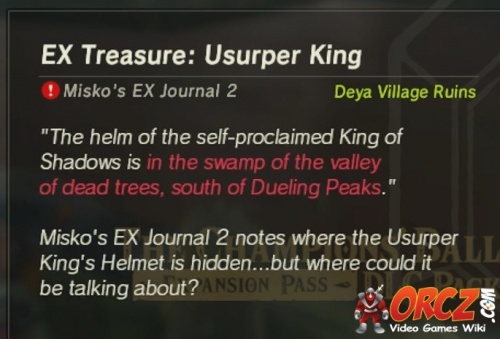