Breath of the Wild: Hobbies of the Rich

Hobbies of the Rich is one of the sidequests in LoZ:BotW

Hobbies of the Rich is a Quest (Sidequest) in the game The Legend of Zelda: Breath of the Wild.

Talk with Hagie during the day time while he is looking out over the wetlands.

Hagie has paid Link to destroy a pair of Guardians in the nearby Wetlands.

Hagie: I normally don't have to mingle with commoners...but I have a feeling about you. I'll make an exception this time. Your clothes... I'm guessing you're a little hard up for cash. Am I right?

Hagie: I don't care about the details. Here, take it. Hand!

Hagie: Hoh ho ho! So you accept, then? Excellent! Now, listen to what I have to say. The Torin Wetland lies to the west of here. You're aware there are Guardians there? Not just one, either... Two of them!! You know how dangerous they are...So, sonny boy... I'd like you to find and wallop both of them in Torin Wetland. Then come and see me.

Hagie: It's you... Do you need something else from me?

Hagie: OK. OK. I saw the whole thing. You did splendidly. I'll give you the rest of the reward, as promised.

Hagie: Why do you look so disappointed? It can't be because the reward is lower than the down payment, can it? You commoners with your notions and assumptions... The whole idea that a down payment is a small part of the final payment is an idea entirely unique to the common folk! In any case, our business is concluded. Go over there. Or anywhere, really. Anywhere that isn't. Right. Here.

Hagie in Tarrey Town asked you to defeat the two Guardians in Torin Wetland and then report back to him.

You were paid in advance, so you're pretty much obligated to go through with it. 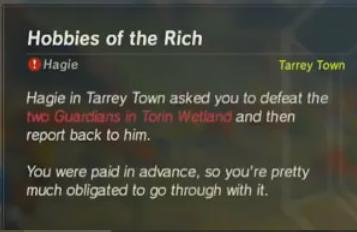 [ Hobbies of the Rich Video Walkthrough]