Breath of the Wild: Hunt For The Giant Horse 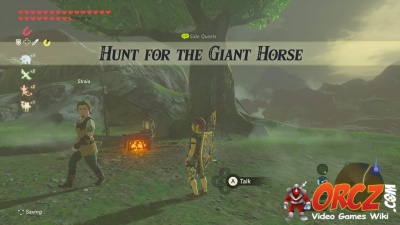 Hunt For The Giant Horse is one of the sidequests in LoZ:BotW

Hunt For The Giant Horse is a Quest (Sidequest) in the game The Legend of Zelda: Breath of the Wild.

Talk with Straia in the Mounted Archery Camp

Straia has heard of a massive horse but cannot approach it because of a hrose-like creature that is on the path.

Straia: Hey there! It's not every day that I see someone all the way out here! We're doing an ecological study on the wild animals in the area. We'd heard that there was a Giant Horse living in this region. Apparently it can't be found anywhere else... That's all we needed to hear! We headed this way to investigate right away!

Straia: The really big horse in this region is likely part of a rare, local species. However, with all the monsters roaming around, we simply can't go any farther. To be so close to discovery.

Straia: That's right... There was even a monster that looked quite a lot like a horse... I approached it, thinking at first it was the Giant Horse we've been looking for, but... Oh, it was terrible. Just form looking at you, I'd guess that you're an adventurer, right? You certainly look strong. Hrm... Hey, how would you like to go and catch a Giant Horse for us?

Link: Leave it to me.

Straia: They say that the Giant Horse lives around the Taobab Grassland... That'd be northwest of here. Do you think you could catch it and bring it back here? Don't stress out over the request, though!

Straia: What do you want at this hour? That horse... It's huge... I've never seen one that big! That is definitely an endemic species! Sorry, but can I take a good look at that horse?

Straia: Thanks, I'll be right back. Hrmmm. This is impressive. Ah, hmm. Quite interesting. Wow. With this much info, I can feel my spirit for discovery murmuring in contentment. It's definitely different, seeing something with your own eyes rather than just reading about it. Thank you! This is to thank you for helping with our investigation!

Out in the Faron Grasslands, you came upon Straia, who is conducting a study on animals of the region. He's said he's specifically looking for the rumored Giant Horse that lives on the Taobab Grasslands 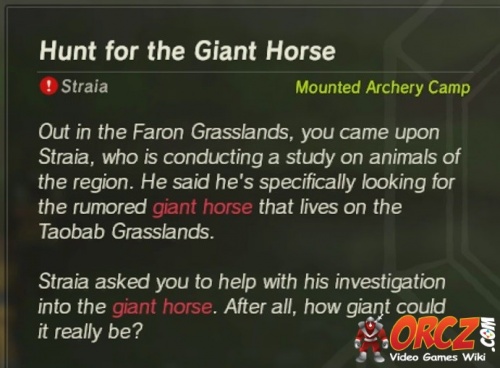