Breath of the Wild: Leviathan Bones 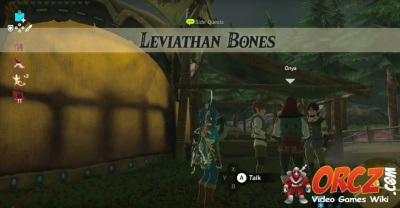 Leviathan Bones is one of the sidequests in LoZ:BotW

Leviathan Bones is a Quest (Sidequest) in the game The Legend of Zelda: Breath of the Wild.

3 scholars are debating what the cause of extinction of the leviathans was.

Onya: My theory is that the leviathans of ancient times went extinct due to an extended ice age...

Garshon: My theory is that the leviathans of ancient times went extinct due to a sudden, cataclysmic drought long ago!

Garshon: I must see that leviathan skeleton from the Gerudo Region.

Garshon: I cannot believe my eyes! You are REALLY good at drawing! With this, I'll finally be able to prove that the leviathans went extinct due to the catastrophic drought. I'm sure my brothers would appreciate your help with their pictures too.

Onya: I'd really like to see the leviathan skeleton in the Hebra region.

Onya: Amazing! It's as if I'm seeing the real thing! This is precisely the evidence I needed to prove that the leviathans went extinct due to a harsh ice age! Please help my other brothers out in the same way!