Breath of the Wild: Missing in Action

Missing in Action is one of the sidequests in LoZ:BotW

Missing in Action is a Quest (Sidequest) in the game The Legend of Zelda: Breath of the Wild.

Talk with Sesami at the Gerudo Canyon Stable.

Sesami was traveling with his friends when they were attacked by monsters and separated. He ran through the canyon and make his way to the stable. He needs someone to help his friends get free from the monsters who have them.

Sesami: Hey, did you happen to see any of my friends? They're four travelers named Oliff, Flaxel, Canolo, and Palme... I don't know. We were all walking together when some monsters suddenly jumped us near the Koukot Plateau path. I took off running and didn't stop until I got here. I thought my friends were right behind me, but when I turned around, they were nowhere to be found. You don't think the monsters could have... No, they're fine. They'll be back any second now. Hey, if you happen to run into any of my friends on the road, please let them know Sesami is waiting for them here.

Sesami: Hey, I heard what you did! You saved my friend from the monsters! I heard you gave those monsters a thorough beat down. If I had the sword of legend, maybe I could have helped.

Sesami: You don't know the legend of the mythical sword that sleeps in the Great Hyrule Forest? Well, they don't just call any old sword "legendary,: so it's gotta be really strong, y'know? A sword like that would turn me into a monster-slaying hero! But it's just a legend, after all. Monsters attacked my friends, and they're not all accounted for yet. I really appreciate what you've done so far, but do you think you could find all four of my friends? I can't thank you enough...

Sesami: To tell you the truth...I wasn't sure I'd ever see my friends again. But when i saw that one of them made it back safely, it gave me hope that my other friends are safe too! I want to look for them, but I just can't deal with the monsters. Maybe if I got my hands on the sword of legend, I'd be powerful enough to save them.

Canolo: At least I'm safe now. No thanks to Sesami. As soon as the monsters showed up, he ran away as fast as he could and left us for dead. Who does that? Especially to a girl! He's at the Gerudo Canyon Stable? If he thinks I'm going to forgive him for this, he's got another thing coming!

Flaxel: Thanks for the assist, pal. That could've been the end of me. Boy, I'm gonna be sore tomorrow. Filthy bottom-feeders...

Flaxel: So Sesami was kicking his feet up in the stable while I was being tortured by those sorry sacks?!Oh, I'm going to give him a piece of my mind, all right. A piece of my fist too!

Palme: Huh? I'm... I'm alive? But...the monsters... Did you get rid of them? That's incredible! YOU'RE incredible! You might even be braver than Sesami!

Palme: Sesami... is waiting at the stable? He didn't come to save me? But he said he'd mastered the martial arts. Did he... lie to me about that? Nah... this must be a misunderstanding.

Sesami: Oh, hey! I've been waiting for you. So in the end, you're the hero who saved everyone. As soon as they all got back safely, a wave of emotion washed over me. Thank you. Thank you so much. I want you to have this.

Sesami: Sorry it's so small. Everyone chipped in for it, but we're in the middle of traveling, y'know? In a way, I'm kind of glad all of this happened. It's helped me realize just how important friendship is. Opening up to others might make you vulnerbale, but it's also the only way to give your life any value. that said, caring for others is an emotional liability, so my friends and I have decided to part ways. Not really sure what the takeaway is here...

Seasmi and his friends ran afoul of monsters near the roads at Koukopt Plateau. Sesami ran for his life, but his friends vanished into thin air.

Sesami was traveling with four friends. Find them quickly and put him at ease. 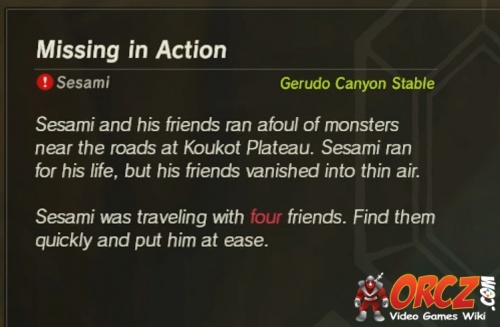 You rescued Sesami's friends, who were surrounded by monsters and unable to move.

Hurry back to the Gerudo Canyon Stavle and tell Sesami