Breath of the Wild: Revali 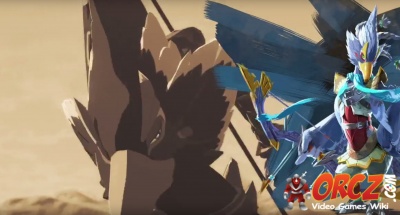 Link talking to the Revali in LoZ: BotW. 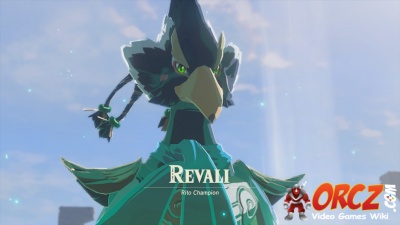 Link talking to the Revali in LoZ: BotW.

Revali is a character appearing in the game The Legend of Zelda: Breath of the Wild.

Revali is the Rito Champion of Hyrule. He pilots the Divine Beast Vah Medoh

Revali: Wasn’t this your idea? You’re the one who wanted to designate the appointed knight with all the ceremonial pomp, grandeur and nonsense we could muster. And, if you ask me, the whole thing does seem to be overkill. I think I’m on the same page as the Princess regarding... this boy.

Revali: Impressive, I know. Very few can achieve a mastery of the sky. Yet I have made an art of creating an updraft that allows me to soar. It's considered to be quite the masterpiece of aerial techniques, even among the Rito. With proper utilization of my superior skills, I see no reason why we couldn't easily dispense with Ganon. Now then, my ability to explore the firmament is certainly of note... But let's not - pardon me for being so blunt - let's not forget the fact I am the most skilled archer of all the Rito. Yet despite these truths, it seems that I have been tapped to merely assist you. All because you happen to have that little darkness-sealing sword on your back. I mean, it's just ... asinine. Unless... you think you can prove me wrong? Maybe we should just settle this one on one? But where...? Oh, I know! How about up there?! Oh, you must pardon me. I forgot you have no way of making it up to that Divine Beast on your own! Good luck sealing the darkness!

Revali: Well now, I've seen that face before... I had a feeling you would show up eventually. But making me wait a hundred years is a bit ... indulgent. You're hear to wrest control of Medoh away from Ganon, correct? If so, then the first thing you've want to do is find yourself a map. That Guidance Stone has the information for the layout of this Divine Beast. Can you make it there?

Revali: There are four terminals remaining! Still a ways to go.

Revali: There are two terminals remaining. You're almost there.

Revali: Just one terminal remaining! What do you know?

Revali: That was the last terminal! Now you just need to start the main control unit! I want you to take a good look at your map. There should be a new glowing point there. Well? Flap to it!

Revali: Good Luck! That thing is one of Ganon's own, and it plays dirty! It defeated me 100 years ago... but only because I was winging it. I can't believe I'm actually saying this... But you must avenge me, Link!

Revali: Well, I'll be plucked... You defeated him, eh? Who would've thought... Well done. I suppose I should thank you now that my spirit is free. This returns Medoh back to its rightful owner! Don't preen yourself just for doing your job. I do suppose you've proven your value as a warrior. A warrior worthy of my unique ability. A sacred skill that I have dubbed Revali's Gale. It's now time to move on and start making preparations for Medoh's strike on Ganon. But only if you think you'll still need my help while you're fighting inside Hyrule Castle. Free feel to thank me now. Oh ... never mind, just go. Your job is far from finished, you know. The princess has been waiting an awful long time.

Revali: Medoh's sights are now set. You'll have a precise bead on Ganon from this vantage point. And when the time is right, give him everything you've got. Now we wait for that perfect moment... Medoh, we've been artfully patient for the last 100 years. I doubt you'll suffer a feather over a few more moments... After all these years, I simply must admit the truth... Even without the power of flight, Link made his way to this Divine Beast... And accomplished something that even I could not... Guess I was wrong about... how lucky would be. I hope that luck holds out, Link... For everyone's sake.