Breath of the Wild: Revali's Song 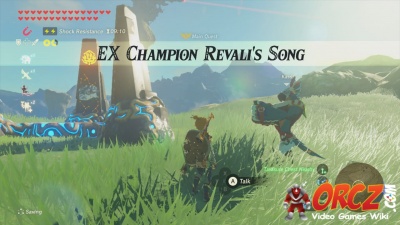 Revali's Song is a Quest (Main quest) in the game The Legend of Zelda: Champion's Ballad.

Link is challenged to take on the trials of one who is to pilot Divine Beast Vah Medoh.

Race Down A Peak Rings Adorn[edit]

Maz Koshia: I applaud your courage in coming here. The locations that will be revealed to you are of trials that will enhance the power sleeping within.

Kass: Hm? How long have you been there? I didn't even notice your arrival! Ah, we meet again! And it seems you caught me... well, talking to myself. Look at that! There's one here too! One of the monuments mentioned in my teacher's unfinished song. Ah, sweet joy! How glorious to sing this song in front of the real monument... The song my teacher left behind... There's a verse about the trials Champion Revali overcame. Allow me to to sing it for you..

...So? Did it move you? By asking around about the Champions of each region, I'm starting to pieces together the key verses of the song. The confidence it must have taken to master a Divine Beast... How inspiring. My teacher's dream is now mine to fulfill. An unfinished song weighs heavily on a bard's soul... I won't allow it. But in order to see this dream to fruition, I must learn more about the Champions of long ago... Thankfully, Teba and the Rito Village elder, Kaneli told me some wonderful stories of the Rito champion. Yet this unfinished song still pulls at my heart. And so, my hometown is but a stopping point on this journey of mine.

The scattered One-Hit Obliteratotr led you to a location where a stone monument with a map of trials appeared. Kass's song seems related...

One, shoot the flame dragon's horn. 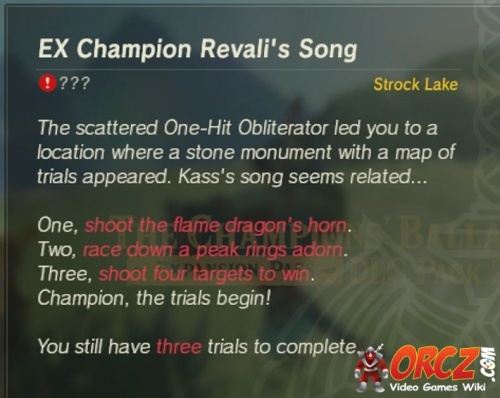