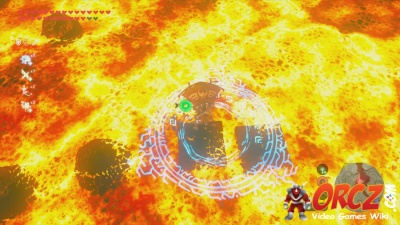 Survive lava's fiery fate is one of the Main quests in LoZ:BotW

Survive lava's fiery fate is a Quest (Main quest) in the game The Legend of Zelda: Champion's Ballad.

Bayge: PUMP IT UP, BROTHER! Oh! It's the fourth Goron Blood Brother! The one who beat both the contest of endurance and our Gut Check Challenge! Do ya know why Champion Daruk chose this place to train, brother? ...Neither do we! But us Goron Blood Brothers are gonna find out by completing the training ourselves! I'm sure this is some part of Lord Daruk's secret Goron champ training. Intense! We're gonna do all we can to be might Gorons just like Lord Daruk! It's the only possible path for the Goron Blood Brothers!

Heehl: FEEL THE BURN, BROTHER! You see that glowing ring in the lava? Think of it as a target, and... stand on the lava, brother!

Kabetta: So sweaty... Brother... Even Gorons can't walk on lava. I wonder if Lord Daruk really did this training... Not that I doubt him, brother!

Bayge: No wonder Lord Daruk chose this spot. It's hard-core, brother! This training is gonna be rough! I can almost taste the gains! Time to strategize, brothers!

The scattered One-Hit Obliterator led you to a location where a stone monument with a map of trials apperaed. Kass's song seems related...

One, stop a titan of molten stone. 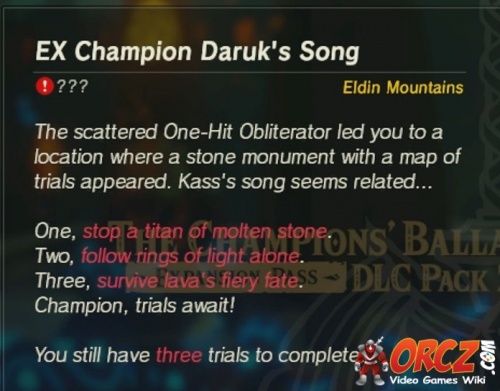