Breath of the Wild: The Hero's Cache 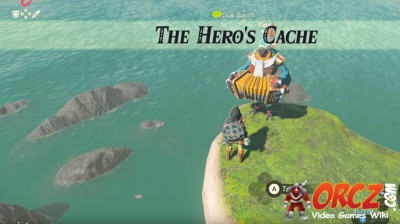 The Hero's Cache is one of the sidequests in LoZ:BotW

The Hero's Cache is a Quest (Sidequest) in the game The Legend of Zelda: Breath of the Wild.

Talk with [[Breath of the Wild: DICK Kass when you find him on a rock tower in Kitano Bay

Kass has heard a song about a hidden cache that the Hero of Legend had left behind.

Kass: Why, hello! I certainly didn't expect to see anyone else up here. How fortunate to cross paths with you again! Did you come to see the sea? This oddly shaped rock pillar we're standing on is the subject of a song. Would you like to hear it?

Kass: An ancient hero spoke these words: "One day I'll return to fight evil. My cache is at 17 of 24, This rock will point toward its retrieval"

Kass: "My cache?" Could it be a hidden stash of money? If it was left by the ancient hero that defeated the Calamity 10,000 years ago, it must be a big amount. Good luck figuring it out. May the light illuminate your path.